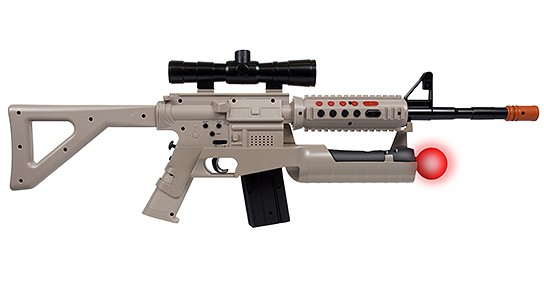 rifle or gun attachment gives added realism to your first person shooter gaming experience and what we have currently are mostly just attachment for you to slap your MOVE onto them. CTA Digital took a step further into realism with its new Assault Rifle Controller for Playstation Move. powered by a pair of AA batteries, this rifle replaces your standard PS3 Dual Shock controller and is compatible with non-MOVE games too. the rifle has a full featured control that your standard Dual Shock Controller has and features a built-in speaker that plays shooting sounds when you pull the trigger. shooting sound ranges from single shot to three-shot burst to fully automatic shooting and can be turned off when desired.

when MOVE is required, just slot the MOVE controller into its lower cradle and you are good to go. the unique dual trigger system of the Assault Rifle also makes contact with the MOVE controller’s ‘T’ button and additionally, the rest of the rifle mimics the functions of the MOVE navigation controller. other features include removal stock and scope. there’s also a built-in rumble feature which provides an even more immersive gaming experience.

the Assault Rifle Controller for Playstation Move retails for $56.99 and is available on major online retail stores. 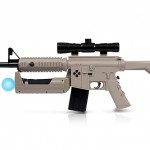 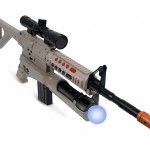