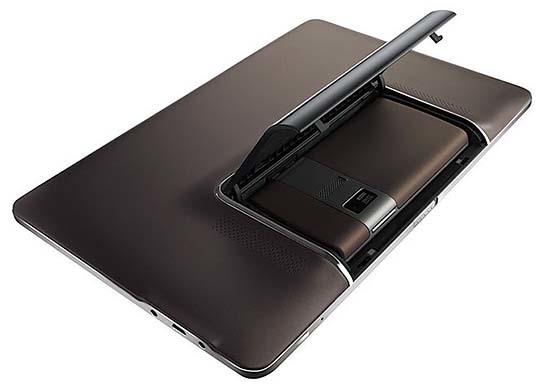 we didn’t feature the previous teasers as unveiled by ASUS earlier, nevertheless, that doesn’t mean that we weren’t interested. in the recent Computex held in Taiwan, ASUS tease us no more by unveiling the Padfone, an Android powered smartphone that is accompanied by a tablet dock that will turn it into an Android tablet. similar to the Motorola ATRIX’s Lapdock, except that the Padfone docks into the pad dock and turns into a tablet. this provides the user with a bigger screen estate to work with, presumably ideal for on-the-road computing if laptop is deem too bulky and heavy to lug along.
[ad#Google Adsense-text-468×60]

the Padfone features dynamic display switching which enables the phone usage to seamlessly expand to the tablet form once it is docked. no details were given but we do know that it will be a 4.3-inch smartphone and a 10.1-inch tablet dock combo. it will be definitely running on the next generation Android OS for smartphone, as oppose to Android OS tablet. makes sense, since the tablet is essentially a shell that will be powered by PadFone. check out an interesting promo video of the ASUS PadFone after break. however, don’t get too excited over this gadget yet as there are no words on its availability and pricing at this point in time.