for those who live in constant fear of being rained by bullets while out on the road, the greatest luxury of all would be a ride that will keep you alive when caught in such unfortunate situation and still provides the luxury that befits your financial status. such is what the Audi A8 L Security aims to fulfill. as the model name implies, this is an armored limousine based on the standard A8 L designed to meet the VR 7 ballistic protection standards that would ward off NATO sub-caliber ammunition, while some areas are build to a stricter VR 9 and VR 10 standards capable of withstanding explosive charges.

obviously, this is not a military-spec vehicle and hence, there are as much metal slugs it can take and so, if a cavalry arrives, you better keep your fingers crossed that one of the two engines offered can help shake off the pursuers. speaking of engines, the A8 L Security has a choice of a 4.0-liter V8 twin-turbo unit with 435 horsepower and 443 lb-ft of torque and a 6.3-liter W12 with 500 horses and 460 lb-ft peak torque, which makes (getaway) century sprint in 7.5 seconds and 7.1 seconds, respectively. at these figures, either engine will not pull you off to safety cleanly, so the combination of heat-form steel plating, aramide fabric, ceramic, and multi-laminated glass should keep you safe while in the process of disappearing from the attackers’ sight.

NOW READ  In Memory Of Christof Klausner: A Playable In-Game K4 Rally “Ur Quattro” And An NFT

the real kicker here is, you will get that kind of protection out-of-the-factory and on top of that, you can expect the same kind of luxurious appointment to keep you company while in the midst of a dire situation. there are other options too (if needed more), including a patented emergency exit system that blows the hinges on the doors for quick escape, a fire suppression system, an emergency fresh-air system, and more. orders can be placed now for Audi A8 L Security W12, presumably in Germany, with deliveries expected to be sometime in Q3 2014. not sure about the V8 model, though and same goes for the pricing, which we supposed would be price on application, or something along that line. 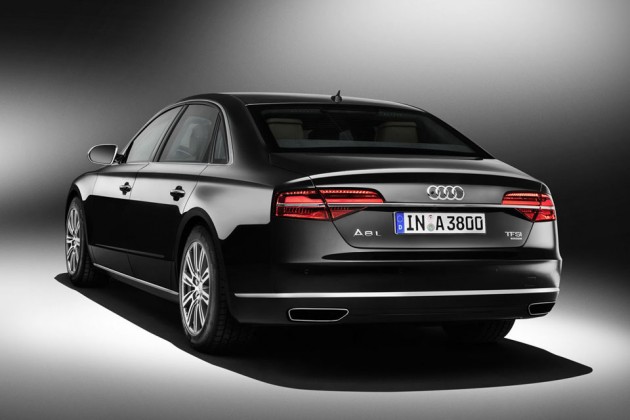