In the recent IMDEX Asia 2017 in Singapore, defence contractors were again eagerly showing off their latest military hardware to entice governments from the world over. It seems like in this year’s show, marine-related technologies were in abundance (probably due to the maritime tension in this region) and among the sea of dark and light gray hardware, the JFD SEAL Carrier Swimmer Delivery Vehicle had most of our attention and for good reasons. As the product name implies, this dark, tube-like sea vehicle is designed with special operations in mind, but what the product did not explicitly point out is, it is actually a submarine/speedboat hybrid. 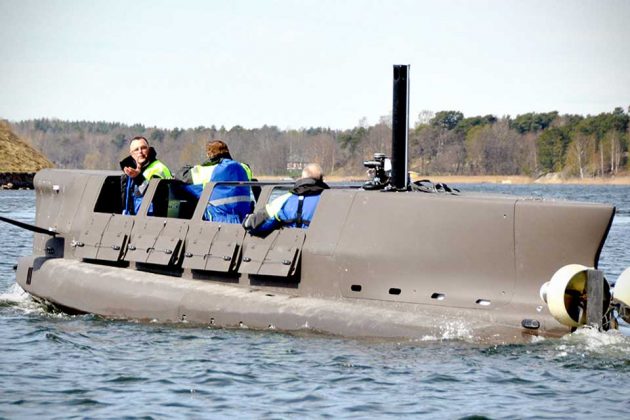 We understand that there was some hype about a hybrid similar to JFD’s called HyperSub, which may get into it in later post, but the JDL SEAL Carrier Swimmer Delivery Vehicle here is an entirely different ballgame. This is all business. As you can see, this 10.45 meter (34 feet) long vehicle sports a narrow superstructure with a streamlined bow – as you would have expected of a submarine, but it also has a boat-like hull that’s wider than the submarine upper. A hybrid propulsion enables it three mode of operations: surface, semi-submerged, and submerged.

Under typical conditions, a water-cooled 345HP diesel engine paired to a Rolls-Royce water jet provide propulsion, enabling surface speeds of over 30 knots (35 mph or 56 km/h), or 4-6 knots (4.6-7 mph or 7-11 km/h) when semi-submerged. This would allow the two crew and six operatives to get to the where they need to go as quickly before submerging underwater to get closer the insertion point undetected. Speaking of which, in the submarine mode, a pair of 10 kW electric thrusters, powered by rechargeable lithium polymer batteries, provide the propulsion offering up to 5 knots (about 6 mph or 9 km/h) and to range of 15 nautical miles (17 miles), and it has a depth of operations of up to nearly 40 feet (12 meters).

NOW READ  Why Jet Ski When You Can Drive A Sports Car On The Water?

Being hybrid with a high-speed surface mode, JFD SEAL Carrier Swimmer Delivery Vehicle can be launched much further away so to avoid rattling the bushes and jeopardizing the entire operations, and it can be deployed by one of two means: airdropped by fixed-wing aircraft or launched from an offshore patrol vessel. JFD SEAL Carrier Swimmer Delivery Vehicle joints JFD two other submersible-only SEAL Pod range, the Sub SEAL that launches from a submarine or a vessel and the Torpedo SEAL that pops out of the torpedo tube, or airdropped from a fixed- or rotary-wing aircraft. Skip ahead for the product video to see SEAL Carrier in action.