A train is defined as “a connected line of railroad cars with or without a locomotive” (ref: Merriam-Webster) and so, if a ’train’ that does not run on physical rail or track, does it qualify it as a train, or even as a tram? That is probably debatable. Anywho, that was the question I had in my head when I first saw this “rail-less” train which was unveiled last week in the city of Zhuzhou in Hunan province, China. Called Autonomous Rail Transit or ART, this novel mass transportation system is China’s latest solution to alleviate the ever increasing traffic congestion in urban centers, presented by China’s biggest rail transit equipment company, CRRC. 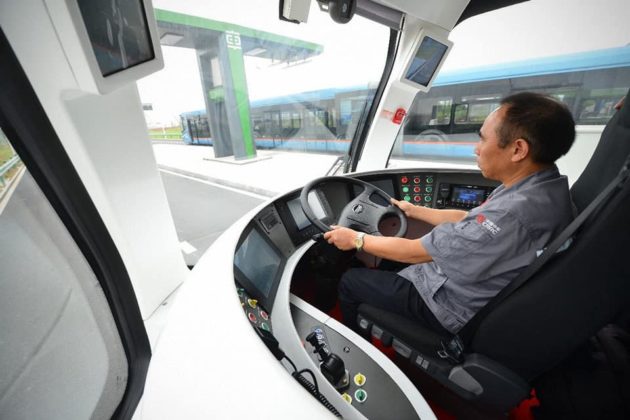 ART looks totally like a train, but the fact that it does not adhere to a physical rail makes one do a double take. Is it a train that is yet to be hauled onto the track? Or is it a bus that looks like a train? Well, I guess you could say that ART is a bit of both, well, sort of. Ok. It is kind of a train, but it has a virtual track made possible by sensors embedded along its route (i.e. track) as opposed to a physical rail system. Theoretically, with one major hardware (the track) eliminated from the equation, ART should be cheaper to build and maintain, and therefore, it should be a cheaper alternative to current form of track/rail mass transportation system. 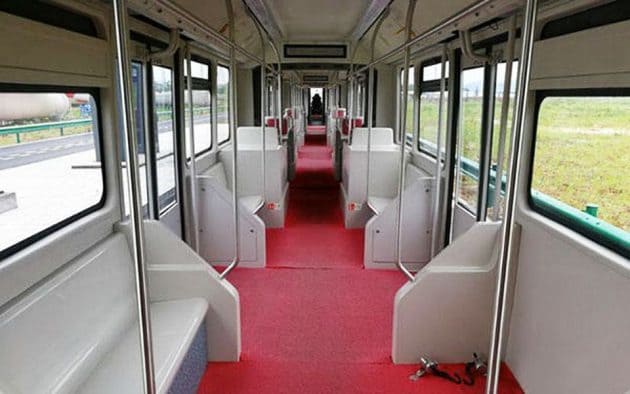 While it does appear to sport a proper console with steering for human intervention, ART is, as its name implies, generally autonomous and it is gentler on the environment too – thanks to its electric drivetrain. Speaking of which, the electric drive is actually rather intriguing. It is fueled by lithium titanate battery which reportedly affords the train up to 25 kilometres (15 miles) range with mere 10 minutes of charging. Pretty unreal, if you ask me. But that’s probably on paper. How it really perform in real life remains to be seen.

Already, we see some pluses in this system like, for example, existing roads could be retrofitted with sensors and such, and thus creating a mass transportation system that can ferry up to 307 passengers, and going at speeds of up to 70 km/h (43 mph), without traffic jam-inducing construction that could last for years. And it is obviously more superior than buses because at 3.4 meter tall, 2.65 meter wide, ART is totally scalable. According to official words, ART can carry up to 500 passengers with a five-cabin configuration. By adding or removing cabins, like a regular metro train, flexibility in operation cost is possible as it will allow more cabins to be added when demand is high and less cabins when there’s less. 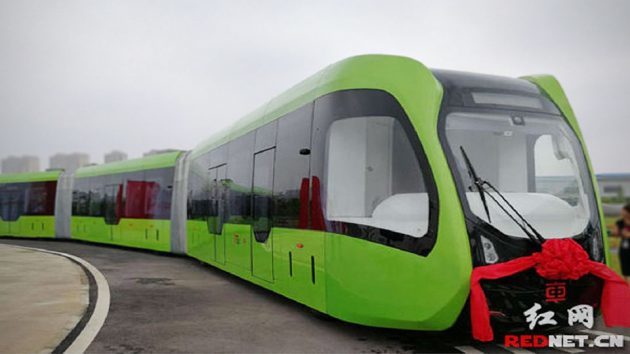 Furthermore, with virtual train track, for the first time, train routes can be actually be altered. Imagine that! No city would ever dream about altering train routes before (with physical track), at least not without pulling the city traffic to a standstill and possibly, emptying the city’s coffer. I mean, seriously, this could be future of mass transportation the world needs, not just China. With a rapidly changing urban landscape, flexibility is critical, if not key, to efficient transition.

Before anyone dismissed this as a hype like the flopped TEB, you should know that movement of Zhuzhou city has confirmed that a 6.5-kilometer (4 miles) ART line will be built in the city with operations expected to start in 2018. If you are not impressed by a track-less, at least be awe that it is soon to become a reality, or so we heard.