The problem with mass produced product is, consumers will eventually get numb to the design. Luxury watch makers like Bell & Ross are not sparred from this natural occurrence and so, it is only naturally when a one-of-the-kind piece surface, it has all out attention. The Bell & Ross x Renault Sport Formula One BR-X1 RS17 Watch is one such attention grabbing timepiece that pops from among the long line of BR collection. It is may be a BR, but it is not just another BR.

For starter, it is one-of-one and secondly, it was a French brand tribute to another and in this instance, it was none other than the Renault Sport Formula One which only makes sense because, Bell & Ross is after all the official watchmaking partner to the French racing team. Not only there is only one piece, but the BR-X1 RS17 was designed exclusively for the recently concluded renowned watch auction Only Watch. For the uninitiated, Only Watch was a biennial charity timepiece auction that supports the research on Duchenne Muscular Dystrophy.

This year’s auction, which was held on November 11, set a new record and this particularly attractive one-of-one timepiece from Bell & Ross was part of it, fetching around 35,000 CHF (approximately US$35,120). This exclusive timepiece touts the latest technological advances and state of the art materials, and boasts all the elements essential to a chronograph watch designed for racing drivers, including the requisite speed calculating tachymeter scale found on the bezel. 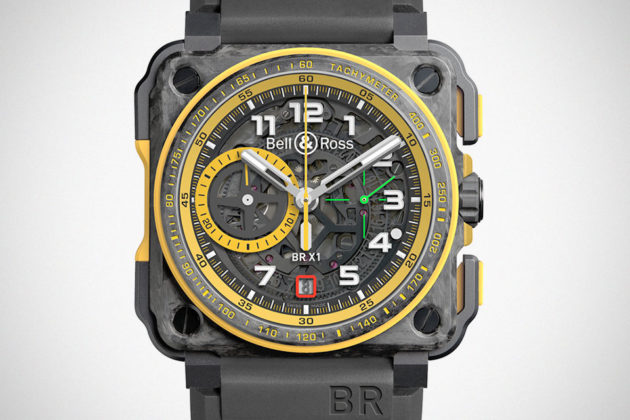 It features a skeleton mechanism, allowing the gears to be observed in all its glory from behind a grey-tinted sapphire crystal. The timepiece’s carbon case is protected by a high-tech ceramic “belt” and rubber, and it has a dial face that bears color codes borrowed from the instruments of the Renault R.S.17 car. Also on the watch are rocker-type push buttons in high-tech ceramics, capped with yellow rubber to make it pops.

Other highlights include metal appliqué with Superluminova for low-light time reading, a BR-CAL.313 automatic mechanical movement that touts 56 jewels, the obvious skeleton chronograph, and a bi-material bracelet of rubber and carbon fiber. The undisclosed winner of the auction not only scored him/herself this stunning timepiece, but also a pair of tickets for a behind-the-scenes experience with Renault Sport Formula One Team at the Abu Dhabi Grand Prix with the opportunity to meet the drivers and receiving the gloves Nico Hülkenberg wore during the race.

Yes. Worn gloves. With all sweat and all that. I hoped it is going to be signed, else it won’t be as valuable and also, the donor better be wishing for Nico made it to the pole position and/or win the race cos’ that will make the gloves even more valuable. Not that the person will need to recoup his donation, but hey, it will certainly feel good to be on the winning team, is it not?