I didn’t mean to post this. I was hypnotized when I wrote this. I was mesmerized by this kinetic desk toy called Mezmoglobe. You see, even the name kind of say what it is already. Designed by Kristoph Krisjans, who do not hide the fact that this is indeed a hypnotic desk toy, Mezmoglobe is a beautifully CNC machined revolving sphere that sports a helix-shaped groove milled into the surface. This helix-shaped groove spans the entire sphere and when spun, it creates a mind-bending (read: hypnotizing) 360-degree optical illusion of a continuously flowing helix.

It is so graceful that I can’t stop looking at the animated GIFs even as I was writing this (so pardon me for any typo or ridiculous grammar mistakes). It has a flat bottom that makes it looked like it is embedded on the surface which it is placed on. When it spins, it looks like the helix is merging with the surface below, or bellowing from the surface – depending on the direction of the spin. Speaking of spinning, the flat bottom is the ‘engine’ behind this magic. It is a rotating base outfitted with high-quality bearing and an embossed leather layer. 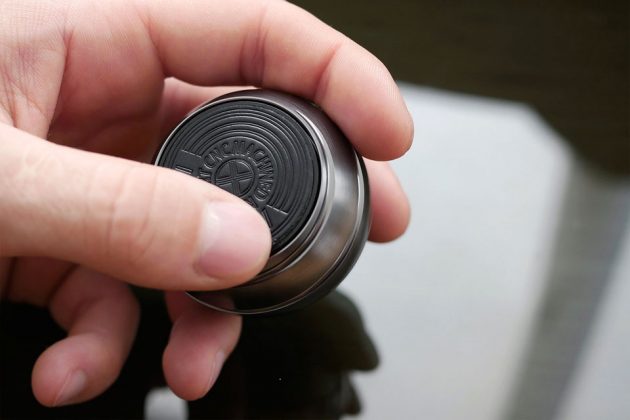 I imagine the leather gives it the fiction to stay put and at the same time, adds a touch of elegance. Mezmoglobe has a classy vibe to it. It does feel like a rich man toy. Like one of those thing residents on Elysium would have in their homes before Matt Damon came wrecking it. Beyond what we have written, there is really nothing more to say. I will leave you to be hypnotized by it. But before that, you may want to know that there are nearly 2,000 folks who are enthralled enough to have contributed over £80K (around US$106K) in funding on Kickstarter. 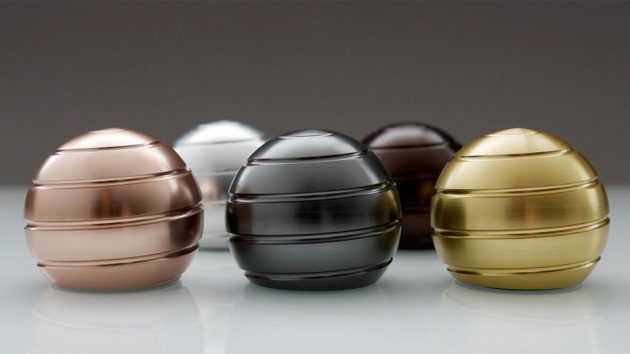 If you are enamored enough, making a pledge of 23 English money (or about 30 bucks) will secure yourself a unit in the color of your choice. The campaign is well over its set funding goal, btw, and so yeah, your pledge for a product is a pre-order. Anywho, I shall not get in the way of you being hypnotized (by the animated GIF and the pitch video below).