You know bicycles? Wait. What am I talking about? Of course, everyone knows what a bicycle is, but the thing is, the bicycle you are about to see is like no other, well, at least not in the last 200 years. Meet Bellcycles, probably the only front-wheel drive bicycle since 19th century. For the uninitiated, when bicycle first came about, it had a front-wheel drive configuration, usually with a ridiculously large front wheel that was driven directly by a pair of pedals and sports a disproportionately small trailing wheel. It was a like a horse. No. Wait. I would say it was even more difficult to mount than a horse because of the insane height it had. 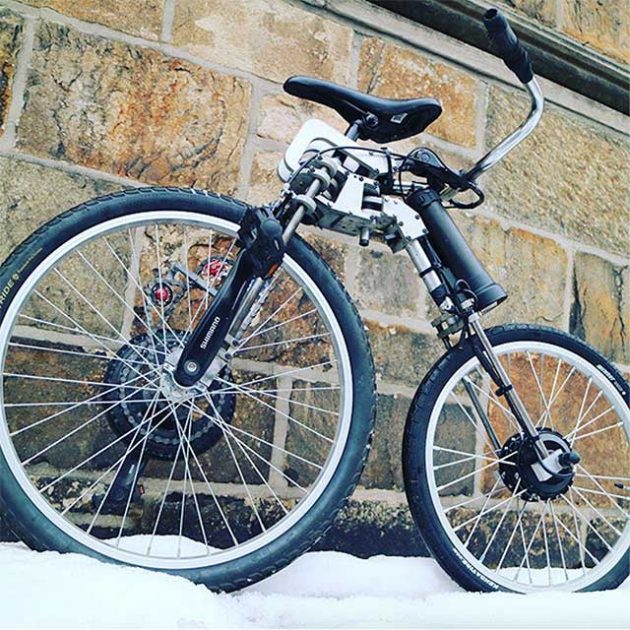 Bellcycles is something of sort, except that it has a more regular sized front wheel and a tad smaller trailing wheel. And it is, of course, front-wheel drive. Creator Labs Bell want to challenge the convention and it claims that, by having a front-wheel drive configuration, it allows the bicycle to have a more compact frame. It has a dual pivot design that affords with the agility and responsiveness while maintaining stability, and best of all, it is modular, so it can be configured to fit your lifestyle. Another features that make Bellcycles stand out is, the handlebar that is behind the saddle and to the sides. Labs Bell said that this will allow your hands to remain in their natural position while still enabling the ability steer efficiently.

Being something is unconventional, it is only natural that you will have to ditch everything know about riding bicycle and relearn cycling. But fear not, its maker claims that it will take a quick 20-30 minutes to get a hang on this reinvented two-wheeler. Hmmm, why do I have a feeling that I will never get use to it? Here’s my rationale: you see, having a handlebar in front of the rider not only offers ease of steering, but subconsciously, it kind of offers a safety reassurance that you are actually holding on to something secured. Also, by having arms extended outward to the front, it forms a kind of leverage which allow a firm holding when the situation arises, but it may not be the case if the hands are to the sides as, clearly, leverage is pretty much non-existence.

Then again, what do I know right? For all I know, Bellcycles may just revolutionized the way bicycles are designed from here on and out. In any case, if you are interested, you can pre-order you very own Bellcycles on Kickstarter by making a pledge of $349. The campaign is already funded and so, your pledge is indeed a pre-order which will be realize this June.