we don’t know how eager Bentley’s fans are to hybrid drivetrain, however, if you happen to be one who embraces lowering your carbon footprint, then you will be glad to know that the Crewe folks has finally decided that it is time to have a hybrid in the stable. though a plug-in hybrid won’t be available until 2017, starting with an all-new SUV. for now, the British luxury automaker will be showcasing its first plug-in hybrid concept in the form of the Bentley Mulsanne Hybrid Concept at the upcoming Beijing International Automotive Exhibition. according to Bentley Motors, the plug-in hybrid system will bring about up to 25 percent increase in power with a 70 percent reduction in CO2 emissions. 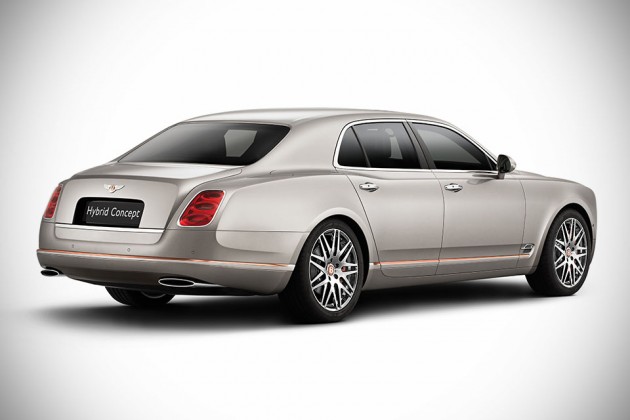 further details of the drivetrain are not offered, but for this Mulsanne study heading to Beijing, it is one fitted with the revered 6.75-liter V8 motor and also, it is said that the hybrid is expected to make an all-electric driving range of at least 50 km (31 miles). the concept will wear copper elements in and out to highlight the car’s electrical veins, including copper details on headlamps, radiator shell bezel, brake calipers, feature line details and badges. the copper accents carry on into the interior, with inserts to the handcrafted veneer fascias, switch bezels, instruments and wrapping up with copper cross-stitching to the Mulliner Driving Specification diamond-quilted interior. additionally, the cabin also sports additional instrumentations, including hybrid power indicator, battery gauge and an e-drive mode switch, indicating that it is in fact a hybrid vehicle.

NOW READ  Rimac Nevera Is An All-electric Hypercar That Costs A Cool US$2.4 Million