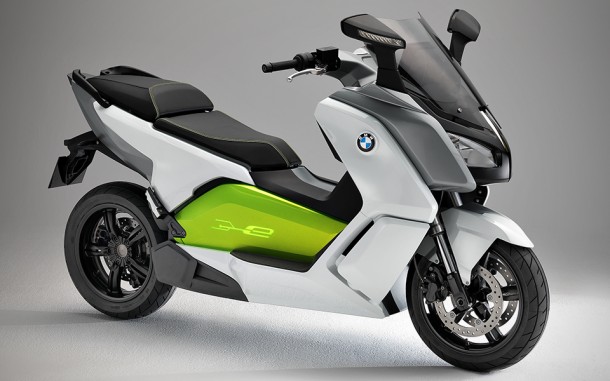 if you love the idea of an electric scooter but don’t want to look like a speed-strangled electric bicycle, then the soon-to-realize BMW C evolution Scooter might be the ride to look forward to. described by BMW Motorrad as near-production prototype, this electric scooter bears similar lines to the existing C scooters and has performance figures comparable to its internal combustion siblings. needless to say, parents would also be convinced that electric drive is probably much safer, on top of it being a scooter which has been widely perceived as being a safer two-wheeled ride. so it shouldn’t be a mammoth task when it comes to convincing your folks to let you own and ride this electric-powered scoot.

driven by an innovative electric drive via drivetrain swing arm with liquid-cooled alternator offering 11 kW of continuous output with 35 kW peak output, the C evolution is capable of an electronically limited top speed of 120 km/h (no figure where given for its century sprint though) and thanks to its 8 kWh high capacity battery, it is able to achieve a 100 km range which should allow rider to commute well beyond inner city area. other highlights include intelligent recuperation while in coasting mode and when braking, a hybrid composite chassis with low center of gravity, twin disc brake system with two pods calipers up front and single disc brake at the rear, steel-wrapped brake lines, Bosch 9M dual channel ABS, side stand integrated with parking brake, a TFT instrument cluster with all the information the rider needs, twin headlamps with rear LED lights, centrally located LED daytime running light, and 5-spoke light alloy die-cast wheels wrapped in lightweight Metzeler Feelgreen tires.

no word on when exactly this awesome scoot will be available but you can have a look at it in the gallery after the break.