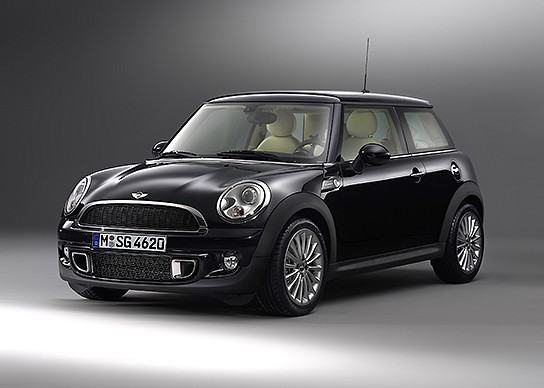 running up to the Auto Shanghai Show 2011, BMW MINI has announced that it will showcase the limited edition The MINI Inspired by Goodwood. this special edition MINI Cooper S will be “built under the guidance of the Rolls Royce Motor Cars designer team.” since it is getting the Goodwood touch, much of its interior such as the dashboard, center console, carpet surfaces, leather seats, roof lining and door et cetera, will get a lavish treatment of the exclusive Rolls-Royce color ‘cornsilk’.
[ad#Google Adsense-text-468×60]

the dash is treated with Burr Walnut alongside a black, Nappa leather dashboard top while the instrument buttons will be finished in piano black. other highlight in the interior includes cashmere for the roof lining, sun-visor lining as well as the rear storage tray. the would be driver and passengers’ feet will in for a treat as the deep-piled lambswool carpet will be in place. damn, with such a luxurious material, i wouldn’t even want to step on it. if you expected the £50,000 price tag to have a choice of color then you will be disappointed. this limited edition Mini Cooper S will come in one color and that is the Rolls Royce shade ‘Diamond Black Metallic’. the limited edition MINI Cooper S will have something a standard Cooper S doesn’t have, or rather, it does not have something a standard Cooper S have and that is, its bonnet with vent.

under the hood is the newest 1.6-liter turbocharged four cylinder engine mated to a six-speed manual transmission gearbox while there is also an option for a six-speed automatic gearbox. that puts out a healthy 181 horsepower and 240 Nm of torque. on the performance scale, this limited edition pocket rocket is capable of a century sprint in just 6.6 seconds. this new generation engine will features a twin-scroll turbocharger, direction injection and variable valve control. other features include special 17-inch alloy wheels, Xenon Adaptive Headlights, Park Distance Control, automatic air conditioning, onboard computer, and an audio system RADIO MINI Visual Boost, which will include a Harmon-Kardon speaker system.