Well, what do you know? BMW Motorrad has extended its reach beyond motorcycles and lifestyle accessories, it has, over this weekend, announced it is leaping into a path never traveled by any motorcycle maker or even by any automaker; it is pursuing the fictional path with a planned graphic novel. Entitled Riders in the Storm, the comic is currently in the works and is due to be released this October. The development was presented at Comic Con Germany in Stuttgart on 25 and 26 June, 2016. For the uninitiated, graphic novel is essentially a fancier name for the typical run-of-the-mill, super thin variety, but with a lot meat of course. 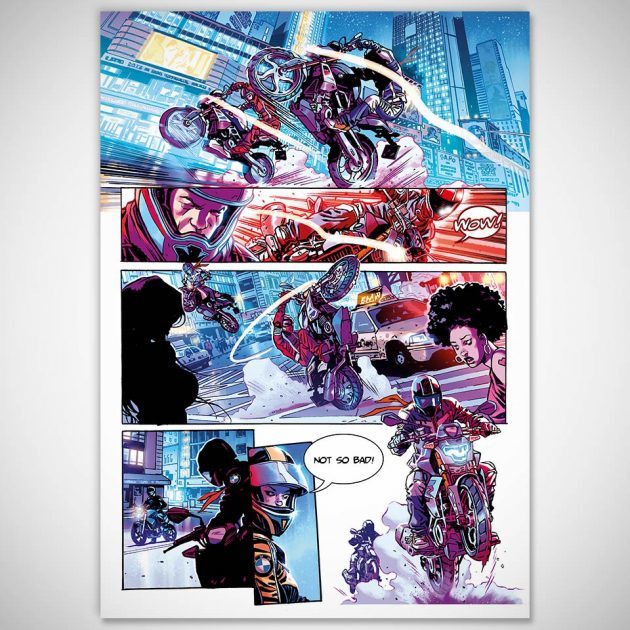 Speaking of ‘meat’, the graphic novel is penned by Croatian author and illustrator Darko Macan while the illustrations is by Italian Riccardo Burchielli, a 15-year comic book veteran who have worked with major U.S. publishers, including DC Comics, Marvel and Dark Horse. It is worth mentioning that this project has particular significance to Riccardo as the man is an avid motorcyclist himself. Though it is not clear whether Riccardo rides a BMW or a Ducati. Just kidding. I am sure this has no bearing or whatsoever on Riccardo’s artistry. The story will be a blend of fantasy, adventure and mystery, and starring BMW Motorrad’s rides, of course. Here’s a brief of what is about:

“Makani – inspired by real-life tattoo model and human work of art Makani Terror – is a policewoman. Her companions are a wolf with exceptional powers, the passionate racing rider Eve and the rather out-of-the-ordinary street artist Nikki Animah. Then there are the mysterious Black Riders of course – they too are inspired by real-life characters.”

BMW Motorrad first graphic novel Riders in the Storm is destined to be a limited edition book, though it is not known how limited it will be.