Sleeper car is, by definition, “a car that has high performance but has an unassuming appearance.” While the Volkswagen Golf R is hardly a standard or economy-class car that describes a sleeper car, this particular right-hand-drive model owned and driven by 75-year-young British gramp Arthur is somewhat of a sleeper among the VW Golf Rs. I know how that sounds. It sounds ridiculous, but it is in fact a sleeper of VW Golf R.

So, how sleeper is it? Oh, nothing much. This VW Golf R here has ‘just’ 600 horses. Yes, really! 600 ponies squeezed out of the 4-pod motor that, in stock form, already produces quite a beefy power output of 310 PS or about 306 HP. If that’s not madness, I don’t know what is. Now, you don’t find many folks at around this age still fancy tricking out cars to make crazy numbers, do you? And that, my friends, is exactly what makes this mate stands out from the senior community. 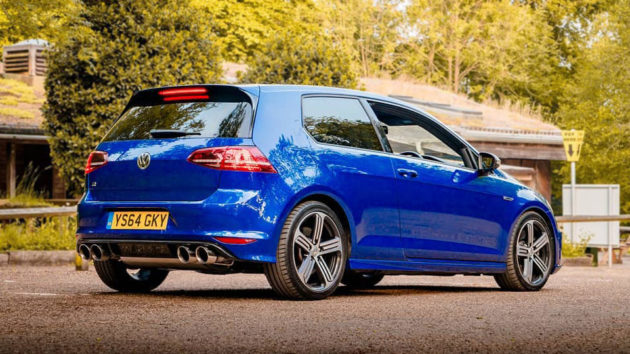 The story goes that this souped up and yet nondescript VW Golf R is the 75-year-old’s replacement ride to his former BMW M135i. It did not get the 600 HP right from the start. Initially, Arthur got the car up to 450 horses, but the petrolhead in him yearned for even more and so, a series of mods was done, including outfitting it with big-ass turbocharger from Turbo Technics, upgraded intercooler, bespoke fuel pump, Milltek exhaust and RacingLine airbox.

All these mods worked to bump the power output to a cool 600 HP. To deal with this newfound power, the DSG gearbox has to be remapped to keep up with the quick pick up speeds. Beyond that, everything else on the exterior and the cabin remains pretty much stock – save for the new exhaust which lends a subtle hint that this may not be your run-of-the-mill R. Then again, when people see an old man driving, most won’t even think that this ride is in fact a beast that could ruin many performance hot hatch owners’ day at the lights.

That’s the beauty of this car. No aircraft-worthy wing, no Mad Max-style aeros and not insane paint jobs. It is just the Volkswagen Golf R you knew, but a very, very angry motor. Sweet. I am inspired! Keep going for the video and be wowed.