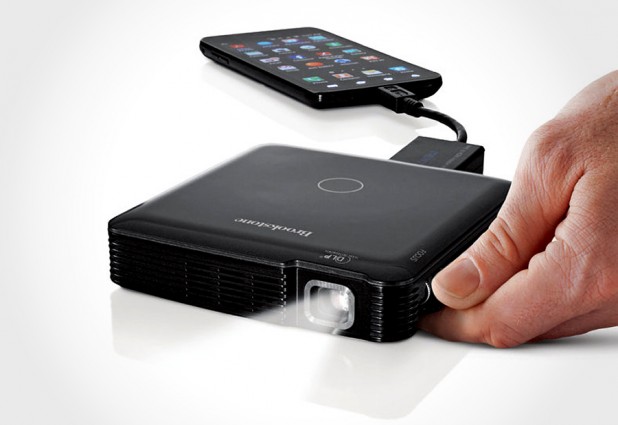 so maybe you don’t need a huge 90-inch LED TV semi-permanently stuck to your wall. cost is one thing for such a gargantuan display, plus you probably want to have that big screen just about anywhere you go, be it for impromptu business presentation, family movie screening or whatever. this is where a highly portable projector like the Brookstone HDMI Pocket Projector can help. powered by Texas Instrument’s DLP technology, this new Brookstone mini projector features an 85 lumen LED lamp with up to 20,000 hours of life that throws a bright, clear 1080p HD image of up to 60″ (diagonal) on almost any flat, vertical surfaces. though it is worthy to note that it has a native resolution of just 854 x 480 (WVGA). the HDMI Pocket Projector connects to almost any devices, including game consoles, video players, computers, smartphones, tablets via a full-sized HDMI port. other features include focus control, two built-in speakers rated at 1-watt each, a 3.5mm auxiliary audio output for hooking up to external speaker system and a built-in rechargeable battery rated at 3500 mAh that’s good for two hours in between charges. a 5V USB port let the built-in battery doubles as a backup battery for your smartphones. considering the effort made to adapt the same DLP technology from the world’s largest projectors into something that would fit in the palm of your hand, the Brookstone HDMI Pocket Projector naturally won’t come cheap. it will set you back at $299.99 a pop, with shipment expected to be from mid-July 2012.