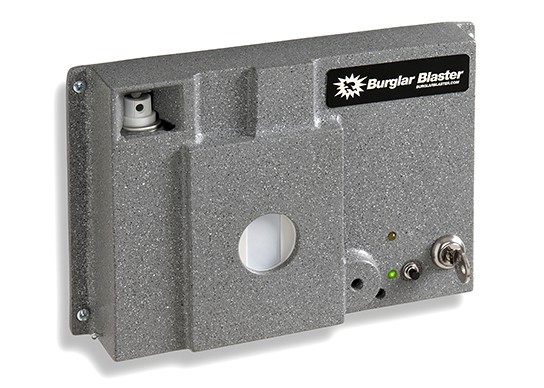 there are several ways to protect your house. there are the preventive measures such as locked doors, windows and metal grills and then there are the deterrent measures such as home security system with alarm, and security cameras. what if the burglars are not daunted by these measures? they would be inside your house in no time. scary thoughts, eh? just imagine those possessions that you bought with your hard earn money will be wipe out clean in minutes.

time to add a second line of security. introducing the Burglar Blaster, a self contained electronic pepper spray-equipped anti-burglary system. this gadget uses passive infrared detection system to detect intruder and once triggered, it sets off a high pitched non-directional alarm, after which the unit will unleash four ounces worth of pepper spray upon the unsuspecting burglar. the pepper spray is enough to cover up to 2,000 square feet of your room. however, the cleaning up of the aftermath is altogether another matter.

the standalone unit runs of sixteen ‘C’ cells which could last for years. being self-contained, it can be installed anywhere in your house without being tied to an electrical outlet. the enclosure is made out of high strength cast aluminum alloy that can be painted to match almost any wall setting. makes sense, cos’ i’m sure you don’t want the burglar to see it and make a detour to avoid the Burglar Blaster. isn’t it?

however, the compact anit-burglary system doesn’t come cheap, it will set you back at $600. perhaps, a small price to pay for a peace of mind? maybe but i’m still concern about the effect of the pepper spray would have on my parquet floors.