Fans around the world have their hands up in the air when the rumor of the next iPhone will do without a headphone jack. If so, it is likely iPhone’s headphone will go Bluetooth as standard, or there’s a slim odd that audio will go through the Lightning connector. Whatever the case might be, Cobble by Taiwan-based Teicneo is one step ahead in solving this future woe that Apple users will face. Cobble is an audio amplifier, but unlike today’s flock of audio amplifiers, it does not leverage on the headphone jack; instead this pebble-shape gadget uses the Lightning port. At a glance, the device looks like a super tiny travel mouse but void of any physical button and has a ’tail’ with a Lightning connector at the end. 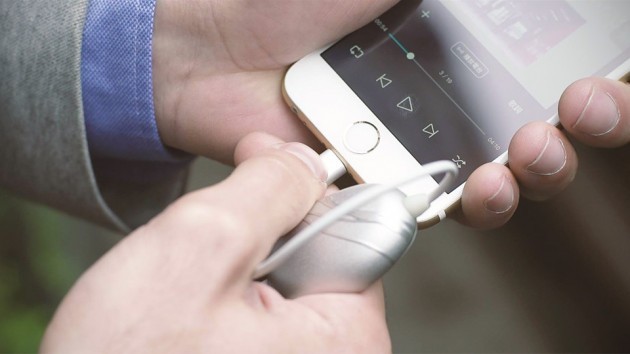 The ‘pebble’ is where all the magic happens. It touts an Apple certified audio amplifier chip, along with an amp integrated DAC made by Cirrus Logic that promised to add treble and bass to your music, or in Teicneo’s words, to make your music less boring. It is a simple plug and play solution that not only counter the impending lack of headphone jack and also improves the overall audio output of the device. More importantly, with Cobble, it will let you use any headphone without worrying about compatiblity – even if the headphone is previously not able to control music or receive call with its inline control, it will now able to do so.

How does this ‘magic’ happen is beyond us. We have yet to try it ourselves and so, for now, we will have to take Teicneo’s words for it. And oh, did we mention that, while it amplifies and do the stuff it does, it requires no battery to power it? Battery-less. A good thing since we already have tons of things to charge in our life. There’s a catch here though; Cobble is not MFI certified, or at least not yet. The team is working to get it MFI certified, but that hasn’t stop over 300 folks from putting their money behind it on Kickstarter.

The campaign has since raised $22K, surpassing its original funding goal of $18K. This means the product, which cost $59 a pop, is a go and if everything goes as planned, backers can expect to receive the product sometime in June/July 2016. Also, it has just 4 days left on the calendar. So, if you want one, you have to act fast.