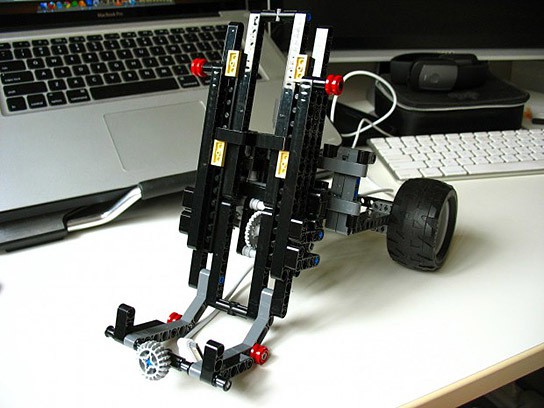 i can’t believe i actually missed out this in my posting *duh* this awesome custom iPad stand was made out from a ‘8416 LEGO Technic Forklift’ set which i thought it look pretty neat. only lovers of LEGO and iPad will go to such length to customize a stand like this or perhaps, the lack of proper stand during that time. the latter was the reason why Singaporean Dean Loh did this stand. being one of the early adopter of the Apple iPad in Singapore (around June 2010), there was a lack of stand for the iPad (in Singapore) and he decided to make one LEGO iPad stand for himself, taking inspiration from those who has done so before him.

Loh’s LEGO iPad stand’s tilt angle is adjustable via a lever at the stand’s back. the stand also features a holder for sync cable at the back which allows the iPad to be synced and charged while standing vertically on the Forklift, i mean, the stand. oh, the stand also incorporates a stylus holder upfront. very nice. for more information, check out Loh’s website.