LEGO bricks. You played with it. You have built your own creations and you probably even visited its headquarters at Billund, Denmark, but wouldn’t it be nice to pretend that you actually worked there? That will be totally dope, right? Well, you know what? You may be able to do that – if Jonas AKA BrickJonas’s latest creation, LEGO Factory Playset has enough support on LEGO Ideas. Modeled after the famous Danish maker’s buildings in Billund, Denmark, this proposed playset is made up of three modules: the main building, a design studio, and a factory building. 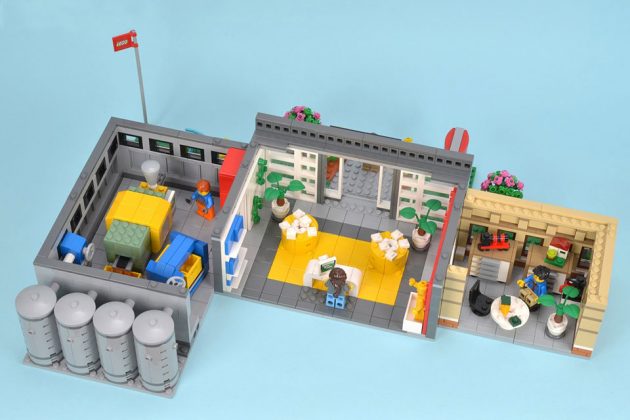 The LEGO Factory Playset, in its entirety, features a signboard with LEGO logo and address, a bicycle stand, a Danish flag, drawers with LEGO pieces (in the Design Studio), a reception, and a ‘functional’ moulding machine and silos (both found in the Factory section). Understandably, Jonas’s work of art isn’t a complete representation of the Billund buildings; if it did, this set will be too massive to handle. That said, it isn’t minifig scale either, because, obviously, it will make this set unmanageable, and probably too impractical and expensive to produce.

It has been a year since Jonas has posted his creation on LEGO Ideas and since then, it has garnered over 1,500 supporters. So, if you guys wish LEGO Factory Playset to have a shot at being an actual LEGO set, you can show your support by upvoting it on LEGO Ideas. If by the end of the 237 days, LEGO Factory Playset gets 10,000 supporters or more, it will be shortlisted as a potential official LEGO product. Keep going to catch the set walkthrough.