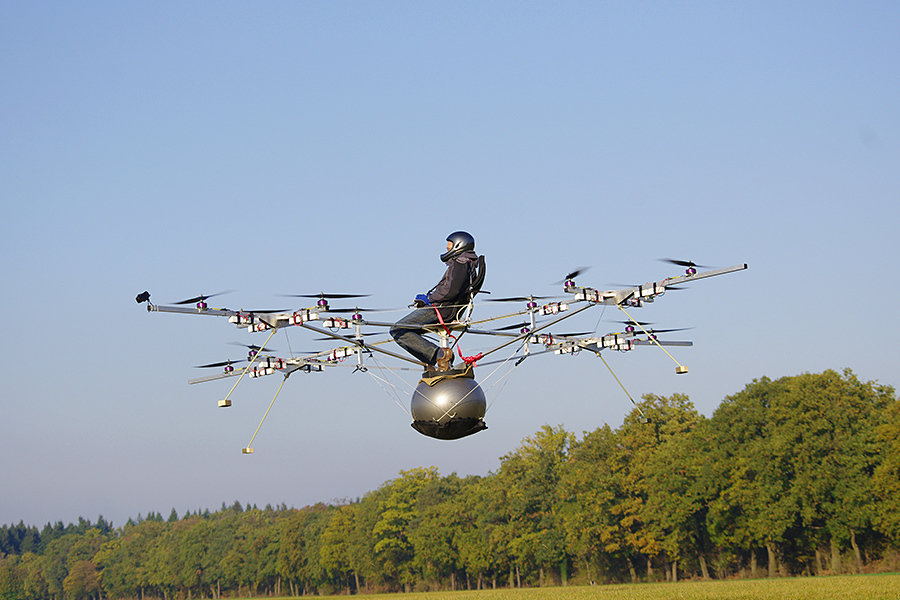 the dream of taking flight with a personal air transport never fail to fascinate us and thus, when we heard wind of this awesome 80kg electric helicopter, we sit up immediately and take notice. developed by German firm e-volo, this odd looking aircraft, dubbed the Multicopter, consists of sixteen propellers that enable it to take off and land just like a conventional helicopter. powering these rather menacing propellers are sixteen electric motors, each having its own speed controller. there’s no pitch to talk about in this aircraft, hence negating the possibility of wear and tear. the onboard computers monitor the altitude and directional control automatically with the pilot sitting on an open cockpit, controlling the aircraft by means of a simple joystick, which works via fly-by-wire system.
[ad#Google Adsense-text-468×60]

with nothing blocking the pilot’s overhead, a parachute can also be use. something which conventional helicopter can’t incorporate. the electric motors draw their juice from lithium batteries that is good for ten to thirty minutes of flight time, depending on its payload and the capacity of the lithium batteries installed. the idea is no doubt exciting but the idea of sitting in the middle, surrounded by sixteen fast spinning blades, is not exactly very inviting, does it? if you have no idea of what i am talking about, just find a size 50 electric helicopter and fire it up. tell me you are not intimidated by the fast spinning blade. perhaps, safety guards for the blades would be a nice additional. you know, for the good of safety. check out a video of this awesome (yet, menacing) electric aircraft in action after the break.