While folks over in stateside are busy developing autonomous road-going vehicles, a startup in China, Ehang, has embarked on creating the world’s first autonomous personal air transport. Dubbed EHang 184 Autonomous Aerial Vehicle, this supersized drone aims to ease your frustration with ridiculous traffic jams by zipping you across the sky to your destination – all without the need for you to do anything, except for pointing out where you want to go on a tablet found inside the cockpit. That said, you won’t be needing a pilot license since no flying will be involved. 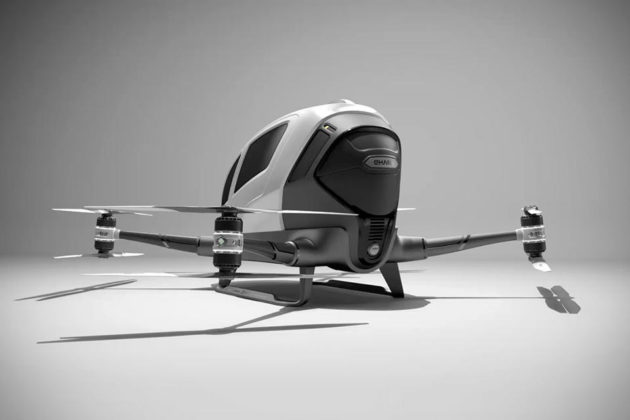 In fact, it don’t even have any control within – the interior is completely void of joystick, buttons, switches and not even basic instrument cluster. All there is a lone, futuristic bucket seat and the said tablet. Which also means, there’s no manual override if there were to have any hiccup (knock on wood). But first, you will have get past the fact that you are being lifted hundreds of feet into the sky by eight relatively small motors mounted on four relatively skinny arms. Speaking of which, the name ’184’ is derived from this configuration: one person, eight rotors and four arms.

Unlike some insane, home-brew contraption, China-based Ehang has a grand plan to make 184 a reality. Not only it has made a prototype, which it proudly showoff at CES, but the company also plans to set-up a low-altitude flight command center to oversee all the 184s out there. While we thrill about Ehang’s creation, we are not sure if it is a good idea, you know, considering that this 440 lbs (200 kg) flying rig will be sharing the sky with countless hobbyists’ quadcopters. But given its maximum ceiling of 1,640 feet (500 meters), it should be out of reach from most hobbyists’ drones, so all there’s left for concern are birds. 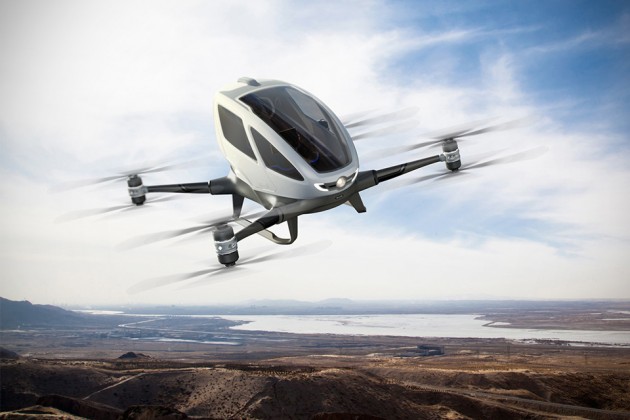 We also noted, rotating propellers at shin level seems rather intimidating and the last thing anyone wants to is to have their shin slice clean off by still-rotating rotors as they disembark from the vehicle. That said, we trust that rotor brakes are in placed to pull the propellers to an instant stop the moment either of the gullwing door disengages and swings open. On the spec-sheet, the single-seat personal air transport’ 8 motors produce a total of 106 kW to enable it lift itself and a payload of up to 220 lbs (100 kg). Like its smaller counterparts, it also suffers from short flight time due to battery limitation. That said, 184 is only good for a 23-minute journey, one way, or under 12-minute if you expect yourself to get back to where you started.

No word on when it will able to take to the skies and how it will be marketed. Will it be a taxi-like service or is it up for grab for anyone who can afford one? There’s really no telling at this point. But first, it has to deal with any regulatory that stands in its way.