Men, when given the opportunity and right technology, can create pretty insane contraptions. The so-called “Swarm Manned Aerial Vehicle Multirotor Super Drone” by YouTuber GasTurbine101 is one such crazy creations. Instead of buying a kit helicopter like most people do, GasTurbine101 created a manned multicopter that actually flies. Don’t expect it to be the next personal air transport, though, because it’s air time is very much limited to just 10 minutes. This mother of all multicopter has a whopping 54 counter-rotation rotors (!), grouped into six control channels with KK2.15 stabilization, allowing it to have a maximum payload of 164 kilograms (about 360 lbs). No forward speed was tested as yet, as it is still going through flight testing. 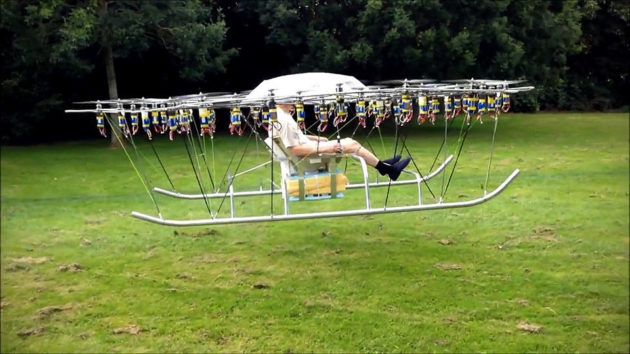 Each rotor is, obviously, powered by a motor, each with its own individual battery pack and electronic speed controller (ESC). Having individual components have its pros and cons. The pros being the reduced in wiring that could otherwise weight the aircraft down (the battery also helps in damping the vibration, according to GasTurbine101) and the cons would be the varying battery endurance. The latter will result in some motor running out of juice sooner and thus, resulting the aircraft not getting the intended lift. Total power yielded from this setup is a modest 22 kW.

The aircraft sports a polycarbonate dome over the pilot’s head for protection. According to its creator, this dome also doubled as rain shelter and more importantly, helps in catching some ground effect that will contribute to the lift. As one might expect, this aircraft is not all as maneuverable. In addition, due to the usually number of small rotors, the craft has little torque for yaw. GasTurbine101 thinks his flying contraption could use a little help from a tail rotor, like those found on a helicopter. It can still rotate on the spot, but probably very slowly and likely to be unpredictable. 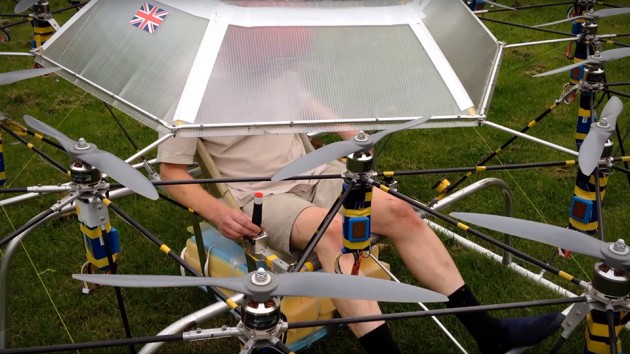 Unlike helicopter, which uses collective for lift, multicopter relies solely on the power of the motor for lift and thus, is not quite an ideal option for personal craft for height. Then again, I don’t think anyone will ever want to travel in one of these and the ding it makes can be quite intense. You know, 54 rotors will not going to be a quiet ride. It is an interesting creation that tickles our imagination, nonetheless. Check out the Swarm Manned Aerial Vehicle Multirotor Super Drone in action in the embedded video below.