Today I found out there was actually a replica of the Spear of Longinus as seen on the cult anime series, Neon Genesis Evangelion. Spear of Longinus, if you don’t already know, is one of the many biblical references in the series. It appeared in the original series several times, including what-I-thought was the most breathtaking moment when Eva Unit 00 piloted by Rei hurled the Spear of Longinus like a javelin into the Earth’s orbit, killing the Angel loitering in the orbit.

Anyways, in that episode, the Spear exceeded the escape velocity and goes beyond Earth’s orbit, eventually landed on the Moon. But why the mention of this Evangelion Spear of Longinus Replica now? Well, it all started with a few images of it alongside a real person I saw a day or so ago. What piqued my interest was, no information was offered beyond the four photos of a man in white gloves, delicately handling the mythical lance. Immediately, I knew I am on a mission to find out more.

After an hour of digging deep into the Internet, I finally found it. This real life Spear of Longinus was one of the many “weapons” created by Japanese sword makers in response to a challenge pitted by Setouchi City’s board of education in 2012 to “replicate the weapons used in the Evangelion series.” The aim of Evangelion-inspired weapons was to leverage on young people’s love of anime to “deepen their appreciation of traditional Japanese craftsmanship.”

So, yeah, the Spear of Longinus you see here is an actual replica. So, no. This isn’t a giant-ass tuning fork like some have cheekily suggested. Granted, at 3.32 meters (10.9 feet) and 22.2 kilograms (48.9 lbs), it was not quite “life-size,” but it was a sight to behold, nevertheless. This particular work of art was crafted by Japanese sword master Sadanao Mikami and his then-successor apparent Shoichi Hashimoto (probably already succeeded? I mean since it has been 5 years since?).

The Evangelion Spear of Longinus, along with some 50 pieces, were first exhibited at Bizen Osafune Japanese Sword Museum in Setouchi City in Okayama Prefecture before it went on to tour the country. We read the exhibition, dubbed Neo Japanese Sword Evangelion even reached as far as Europe, including Paris and Madrid in 2014. So, now you know. 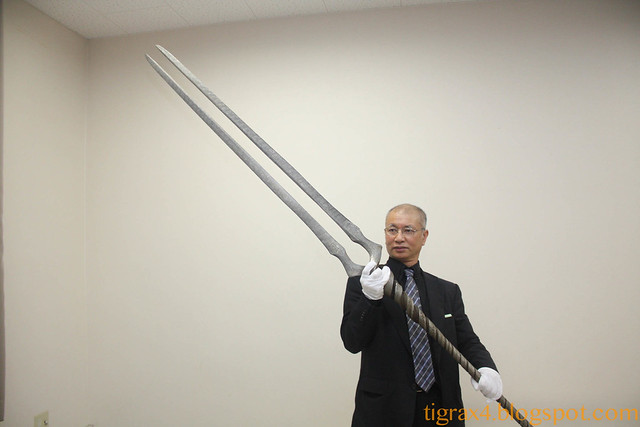