Festo may be an industrial control and automation company best known for its pneumatic products, but over the years, it has pretty much sealed its reputation as the master of robotic biomimicry. Seriously, the robotic stuff that this German multinational company has came up with thus far were fascinating, thrilling and at times, somewhat nightmare-inducing. And one of the latest to join its growing portfolio of robotic biomimicry is the BionicFlyingFox you see here. 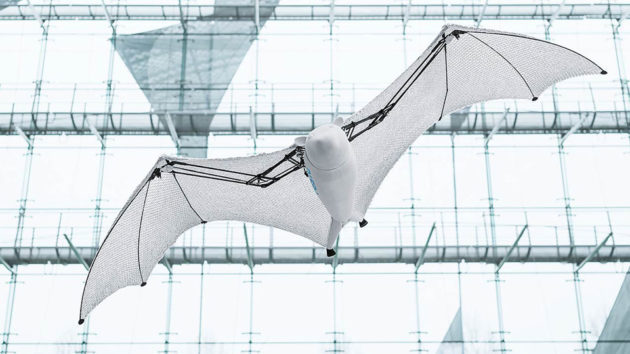 Developed by Festo’s Bionic Learning Network, BionicFlyingFox’s 580g ultra lightweight body leverages on a combination of onboard electronics and external motion-tracking system to enable it to fly semi-autonomously in a defined space. BionicFlyingFox is, obviously, a biomimicry of the flying fox which, btw, isn’t really a fox. It is a bat of the genus Pteropus that falls under the megabat suborder known as Megachioptera – the largest bats in the world.

The hardware (i.e. the robotic creature), which has a wingspan of 228 cm and measures 87 cm long, is in itself an engineering. It features a specially developed wafer-thin, elastic membrane that stretches from the metacarpal and finger bones down to the foot joints, and like the real animal, every articulation points are on one plane, thus allowing this robotic flying fox to control and fold its wing together independently.

The elastic nature of the membrane prevents it from creasing when the wing is folded and it is incredibly robust. In fact, I would go as far as to say that it only lacks self-healing ability to make it a stuff of nightmare. You see, the membrane’s resilience is lent to it by the honeycomb structure that will contain any tear to prevent it from getting bigger, thus allowing it to continue flight in the event that the ‘skin’ sustains minor damage.

But how does this marvelous man made creature flies? In simple words: machine learning. Two infrared cameras on a pan-tilt unit track the artificial creature’s motion by picking up movement of the four active infrared markets on the legs and wing tips. The images are then pass to The Central master computer where the data and coordinates are compared with the ground master computer’s data to make sure it is going where it is supposed to.

That is as far as the ground base computer does, however; how the robotic flying bat needs to manipulate its implements to execute the desired path is computed by the flying fox itself. Think of the ground master computer as the air traffic controller and the bat is the aircraft. The ATC tells it where to go, but the brain of the bat decides the best course of action (in this case, movements of the legs and wings) to complete the instruction given.

The flying fix still need to pull the control algorithms from the ground computer, though, and the computer, it is alive. It is always learning and improving itself, and thus enabling the BionicFlyingFox to improve its flight with each circuit flown. Now, the only thing it lacks is some seriously robust artificial intelligence, some onboard sensors to replace the tracking cameras, and a free flow of battery juice to enable this thing to go on its own, in the wild. Well, it could happen, you know?