Ikea is a prime example of a business that can keep up with times. While the Swedish firm is generally known for its minimalist flatpack furniture, it is also a company that sells smart lighting (in addition to regular lights), wireless charging pads and now, Bluetooth speakers. Wait, what??? Yes. You read that right. The Swedish furniture giant has announced the availability of two Bluetooth speakers: a portable model called ENEBY 20 and non-portable model called ENEBY 30.

As denoted by their model name, both are from the same series with the former sporting 20 watts of audio prowess and measure a bag-friendly 20 by 20 centimeters (8 by 8 inches) and the latter is a 42 watts powerhouse (courtesy of a 3-driver set up, as opposed to the 2 found in ENEBY 20) in a not-exactly portable size of 30 by 30 centimeters (12 by 12 inches). Yes. They are squares, a shape that, for some reasons, is not widely adopted by speaker makers. 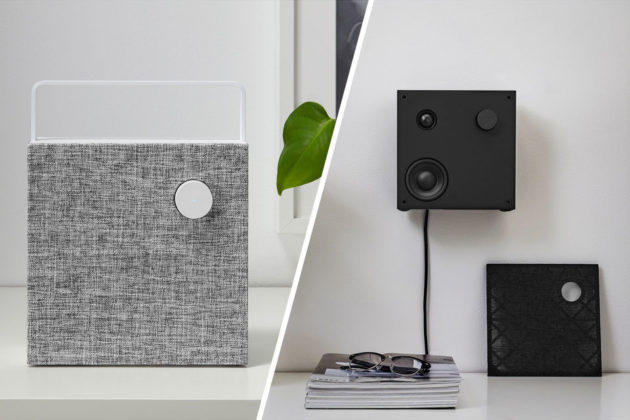 As far as design goes, these wireless speakers are true to Ikea’s minimalist approach. Each speaker sports a lone knob towards the top right corner that lets you turn it on/off, tweak the bass and treble, as well as adjusting the volume. In addition, each speaker boasts auto-off function, removable speaker mesh fabric (for those who digs the industrial look), a 3.5 mm auxiliary port for non-Bluetooth-enabled sources, and the built-in Bluetooth connectivity allows for up to 8 devices to be connected to the speaker. Nothing has been trimmed, despite its minimalist approach.

The larger ENEBY even gets a rear bass port around the back which Ikea said can doubles as a handle if it needs to be moved. Speaking of the ENEBY 30, it is actually designed to fit Ikea’s KALLAX shelving unit for seamless look and fit. Dope! The smaller of the two, on the other hand, comes with an integrated handle for easily carrying (note: in Ikea’s traditional, this has to be installed by user, but it is not a big deal) and unlike the ENEBY 30, it is destined to be hooked up to the wall outlet; it has the option for a battery pack ($20) if untethered freedom is what you desired. 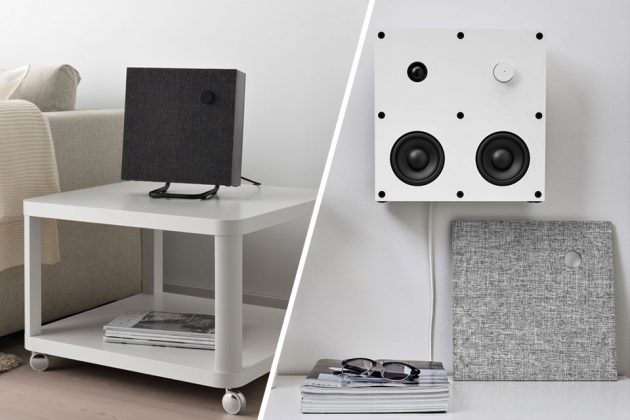 There is a wall mount option (achieved by using the optional wall bracket) too for both models, but you can save yourself some money by hanging the ENEBY 20 by its handle. Or if you down with the floor, or just any flat surface, there is a $10 stand too. But really, you could just let them stand on their own. I don’t see any reason why they can’t stand on its own.

The Ikea ENEBY Bluetooth Speakers are available in a choice of black or white, priced at $49 and $89 for the ENEBY 20 and ENEBY 30, respectively. For now, it appears that Ikea ENEBY Bluetooth Speakers are only available in stateside and across the pond, in the U.K (for £45 and £80). Bluetooth speaker is just the tip of the iceberg of what’s to come from the furniture giant (who’s also known for its Swedish meatballs).

The company is expected to introduce a range of products (it could be anything. Integrated audio cabinet, wireless audio products or whatnot) in a collaboration with SONOS. But that will only materialize in 2019 and so, for now, its just these Bluetooth speakers.