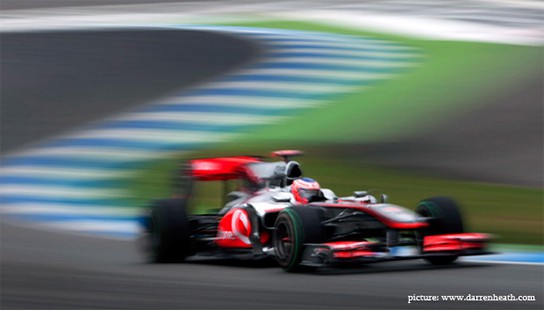 it may sounds ridiculous to true-blue horsepower-hungry racing fans, but according a report by CNET UK, this is going to happen in 2013. come 2013, Formula One race cars will be powered by smaller, more fuel efficient hybrid engines. currently, Formula One race cars are powered by naturally-aspirated 2.4 liter, V-8 engines which will be replaced by 1.6 liter, four cylinders turbo-charged engine with Kinetic Energy Recovery System (KERS). this will, reportedly, reduce fuel consumption by as much as 50 per cent.
[ad#Google Adsense-text-468×60]

other measures to reduce fuel consumption include limiting the amount of fuel flowing into the engine by reducing the revs from 18,000 rpm to 10,000 rpm and also limiting the fuel capacity. apparently, engine power will remain the same. that’s quite a daunting task to be milking over 700 horses out of a 1.6 liter motor plant. but that’s exactly what it will be done – squeezing out about 600bhp out of the single turbo engine (a dream of all boy-racer) while the balance horsepower will be from the KERS power boost.

looks like this is another effort to make the race more sustainable and more eco-friendly. while reducing fuel consumption is one way, what about the other expendables? tires, maybe? as CNET UK reporter, Rory Reid has pointed out, much of the CO2 emissions and fuel usage comes from transporting the cars, staff and equipment around the world. even with that in consideration, that’s also just one part of the whole equation – what about the built up of tracks in city race? imagine the amount of emissions and fuel used just to get the track up and running for a three days event.

perhaps, Formula One would look into those ancillary activities in future too. well, we may never know. all i know is that i will be awed that 600 horses could be possible for a 1.6 liter single-turbo engine… man… what an inspiration to those 1.6 liter racer wannabe.