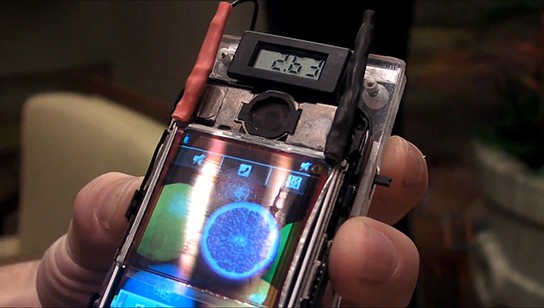 (image credit: Wysips) the image above shows the prototype on a smartphone with an electrical readout that indicates how much energy the solar touchscreen can generates
the notion of solar power mobile phone isn’t new but this French firm, Wysips, has a better idea of where these photovoltaic cells should be on your mobile device – right on your mobile device’s touchscreen. they have perfected a transparent screen coating that is less than 100 microns thick and is able to capture enough energy from the sun or any light source to generate electrical energy to supplement the power of your mobile device.

this technology consists of two-layers: the first is the super-thin photovoltaic cells and the second is a layer of cylindrical lenticular lenses. the structure and layout of the film enables light from the device to exit through this double layer film to reach the user eyes without distortion, while the incoming solar energy focuses onto the photovoltaic layer, generating the electricity. Wysips expect to see the working product to be available in the market within the next twelve months.

while the touchscreen transparent PV cells may not generate as much electrical energy as we would have liked but it could be an welcome addition to any mobile devices in support of its main battery. this technology has many significance to mobile device developments. beside the obvious advantage of longer battery life, it could also mean shorter charging time with the aid of the solar power, or smaller battery which can result in a even more compact form factor. whichever way, it is indeed an exciting development.

NOW READ  10 Technologies That Once Seemed Like Science Fiction

check out the video by laptopmag on this innovation after the break. the best part about this technology is that it will not be restricted to just smartphones as Wysips see wide area of applications including tablets, blinds, textiles, street furniture, advertising and even in sailing.