It has been a while since we look at Casio G-Shock watches. There are just way too many watches being turn out, but this one here had my full attention because, bright red accents. This new debut from Casio is the G-Shock GA700BR-1A men’s watch. As you can see, the bright tangy red accents beckon for everyone’s attention. The bright red accents can be found on the face and bezel, and extends to the back of the rubber strap (referred to as “two-tone strap”). The latter is something you hardly notice if you wear it, but it is a nice touch nonetheless. 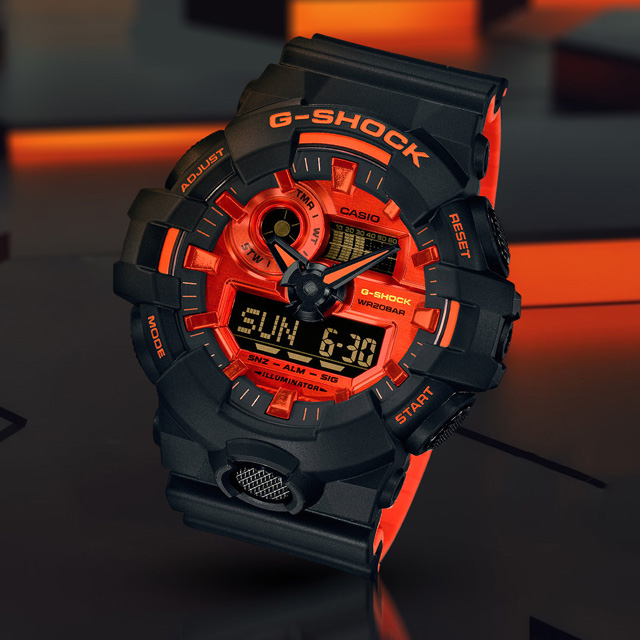 It has vapor dial, a large front button and 3D bold hands on the face. The vapor deposition on the dial ring and matte band are some of the design features directly influence by streetwear apparel. On the build aspect, this analog/digital hybrid timepiece features G-Shock’s original resin molding technology that makes the watch shines like metal.

Aesthetic aside, the G-Shock GA700BR-1A Men’s Watch comes stand with a host of standard G-Shock technology, including super LED light, World Time (48 cities + UTC), 4 daily alarms, 1/100th second stopwatch, 1/10th second countdown timer, 12/24 hour formats, hand retract function, 5-year battery, water resistance up to 200 meters (656 feet), and it is, off course, shock resistance. All these features and functions are presented in a super eye-catching bright red on black 53.4 mm case. Well, what can I say? Big case and bright red are totally my kind of thing.

The G-Shock GA700BR-1A Men’s Watch will retail for $110 when it becomes available this December at select G-Shock retails, including Macy’s, G-Shock Soho Store, and Gshock.com.