LEGO-related world records aren’t new, but this particular LEGO-related Guinness World Records is something quite unthinkable because, it is about walking on a path laid with countless LEGO bricks. Stepping on a couple on accident is enough to bring tears to anyone, let alone intentionally walking over thousands and thousands of LEGO bricks. But yeah, it is a thing and it all began in Portland, Maine, in 2014. A video store had a promotion where, if a person brave the 12-foot-long “LEGO Firewalk,” the person get to purchase The LEGO Movie at 50 percent off.

Subsequently, Bull Moose, a music store, did the same (also in 2014) and it went viral after actor George Takei posted a picture of the Firewalk at the store. From then on, it just went viral with other stores and events in stateside doing the same brutal walk. But it was until January this year that this LEGO Firewalk went pretty insane when one LEGO fan and vlogger, Russell Cassevah AKA Brainy Bricks, became the world record holder for walking 120 feet of LEGO bricks for a local charity. 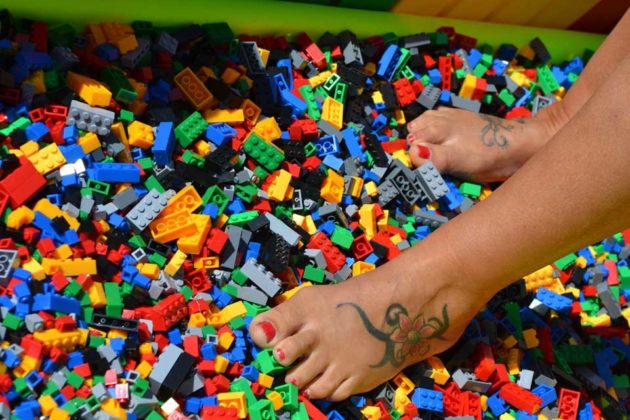 Three months later, YouTuber Dude Perfect wiped the record by making the excruciating walk at a little under 147 feet. Then, it happened again. This time by the hosts of LEGO’s own YouTube show, Rebrickulous, who walked an unimaginable 1,264 feet, 6 inches, perfectly swiping Dude Perfect’s record. When Brainy Bricks made the record in January, he never thought anyone will be busting his record anytime soon. His record was broken anyways and not once, but twice.

Fast forward to April, he decided he will attempt a new world record again, but this time, he wanted to set the bar so high that no one would even think about breaking it. And he sure did; walking a total of 2,737 feet on a square circuit laid with thousands of red 4×2 LEGO bricks. In return, he reclaimed the title, along with some very nasty souvenirs by the way of sores covered, bleeding, swollen feet that had to be wrapped in bandages.

If for some reasons, you want to have a go at this LEGO Firewalk, you will want to get in touch with UK Firewalk. The U.K. event company organizes such kind of walks (in addition to walking over glasses or hot coals) as part of corporate team-building exercises and for charity events. So, now you know. You can learn the science of LEGO walking in an article by Linda Rodriguez McRobbie posted on Smithsonianmag.com. You can see Brainy Bricks attempt in the video below.