Sometime, a missed opportunity may not be a bad thing at all. Such is in the case of the real-life Fallout 4 Pip-boy we first saw last year. This post-apocalypse smartwatch of sort was introduced with a hefty $350 sticker and it is essentially a replica of the in-game device, but has real-life smartwatch functionalities instead. In other words, it probably won’t help you get through a post-apocalypse scenario, unfortunately. Anywho, as it turns out, it was a blessing in disguise if you missed it the last time round, because Bethesda, the game developer behind Fallout 4, is bringing the real-life Fallout 4 Pip-boy back for a limited time and the most brilliant part is, it will cost just 100 dollars bundled with the new version of the video game, AKA the “Game Of The Year” Edition.

So, not all missed opportunity are bad. If you don’t already know, this 1:1 scale replica syncs to your smartphone which then allows you to take and make calls, access contacts, text messaging, and access audio files – all from its large green monochrome green display. While it may have a huge display, it can’t playback video files though. The device also features working buttons, dials, and knobs, or at least most of them are, but while so, not all buttons, dials and knobs necessarily has real functionality. Additionally, it will come with matching dock/stand which doubles as speaker when the post-apocalypse wrist-worn gadget is placed on it.

The limited edition real-life Fallout 4 Pip-boy will, as mentioned, come bundled with the new version of the video game and it is destined to hit the North America markets starting September 26, 2017. It is an exclusive thing, so everyone else outside of North America is pretty much out-of-luck as far as official channels are concerned. Pre-order for the Fallout 4 GOTY Pip-boy Edition is open now and so, we did suggest that you secure this bargain deal before it runs out. 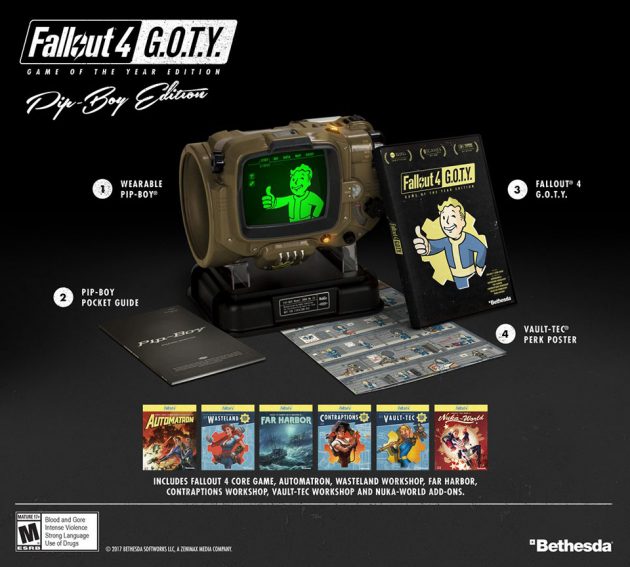