I would like to think the trend of not tucking in shirt stems from the fact that it gets untucked as easily as it was tucked, and as every men will agree, that is a hell of an annoyance. But what if you really need to tuck it in, like with formal attires? Well, wear a inverted garter belt then. Don’t laugh. I am serious because that’s what the NV S-Holder essentially is. It comes in a set of two, one for each leg, and it works pretty much like the garter belts wore by women in the 50s/60s to hold up their stockings. However, unlike the women’s undergarment accessory which basically pull up the stockings, NS S-Holder keeps the shirt pulled down thus preventing it from being untucked.

This thigh-worn cuff has three straps extending out, each hooking to your shirt using a sleek, flattened clip much like suspenders. The magic of staying tuck begins with sliding one NV S-Holder per leg, clip the straps to your shirt and adjust them according to the length of your shirt. Once done, slip on your pants and voila!, no more accidental untucking of shirt ever – even if you pull off a hundred jumping jacks it won’t budge an inch. An age-old men’s preoccupation finally eliminated. 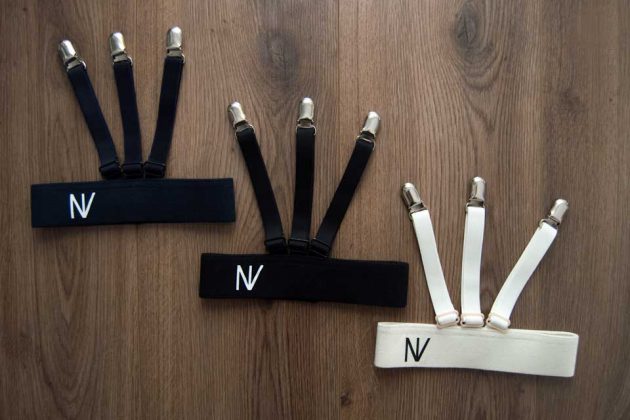 In fact, this nagging problem was resolved entirely since last when the Slovenia-based company came up with the first version, T-Holder. And so, yes, S-Holder is the second iteration, an improved version based on the feedback provided by its users. Once again, NV-Tholder has hit up Kickstarter where you can pre-order a set for $38. Like the outfit’s previous endeavor, there’s no worry about funding cos’ S-Holder has made well pass its set funding goal which is a prove that how widespread this problem is and how men are determined to put it behind them.

NOW READ  Cycop SWIFT 2.0 Backpack Is Sleek, Functional And Has A ’S’ Opening For Unhindered Access