There’s always an inherent danger when a life-taking weapon looks too much like a toy or vice versa, but apparently, that kind of confusion is not on the top of gun customizer Precision Syndicate LLC’s mind when it turned a real working Glock pistol into a NES Zapper Gun lookalike. And by turning, we do mean giving the deadly weapon a ridiculously awesome paint job that reminiscent of the original NES Zapper gun. For the uninitiated, NES Zapper gun is a console toy gun that was designed for shooting pixel ducks in Nintendo’s Duck Hunt game. 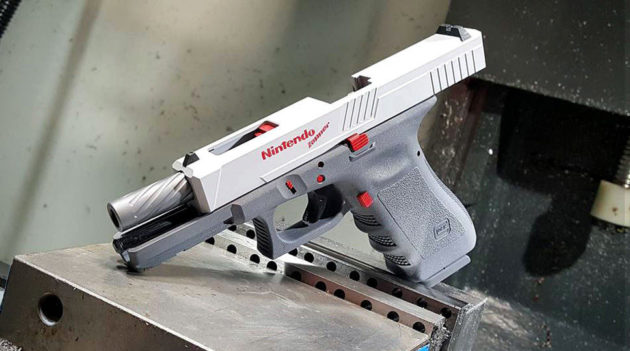 By now, any logical mind would have thrown up their hands in horror that a weapon as dangerous as pistol now looks pretty much like a toy. However, we are not going to lie to you, we love it, despite our conflicting conscious knowing that it could be very dangerous. The last thing the society needs is another loss of innocent life because of confusion. Heck, even a guy with a fake Samurai was mistakenly shot at and so you can imagine what this could cause. Lucky for you and me, this is not for sale, nor will the company do any of such customization for anyone, ever.

Accordingly to Precision Syndicate LLC’s comment on its Facebook post, which apparently had been pulled, this is a one-off thing created for a close friend. This means, it is not going to happen again and so, stop asking them about it. Then again, the idea has been sown and we just hope no one replicates it. Though, it is worthy to note that gun enthusiasts have been customizing the look of their firearms for like forever with some even given their beloved lead pushers lovely paint jobs which totally transform the look (how does pink sounds?). Those are equally dangerous, though granted, they won’t be as dangerous as one that look like a zapper gun.

P.S. Seriously, Precision Syndicate LLC didn’t deserve the flak it received. Just because they posted it on social media doesn’t mean anger should be directed to them. To be fair, at least one other folks have ‘transformed’ a Glock into a NES Zapper Gun. Don’t believe? Google it.