We usually don’t do rumors and if we did, it is almost always about Apple iPhone, but looking at how the smartphone industry have shifted so far, you know, Google getting into the hardware making itself, we think it is time that we dish out some rumors on the upcoming Google Pixel 2. Anywho, what you see here is a render based on the rumors and leaks that have been floating around the Internet over the last couple of months, courtesy of Android Police. Whether or not the final device will look like this, it is pretty much anybody’s guess, but we secretly hope it is. If it does really look like, I am all for it and I am not apologetic for being a sucker for design.

According to rumors, the next generation Google Pixel XL will have an entirely different aspect ratio (18:9?) – thanks in part to the super cool bezel-less display which will see most of the front taken up by a large 6-inch LG AMOLED display. The result is a longish device which I personally have disdain for previously, but it kind of grow on me after the while. I guess the future in display will be leaning towards cinematic display moving forward – that’s in addition to the 2K or 4K display which will also become a standard affair in future flagship devices. The rendered depiction had a single camera, but according to some latest sources, it could be a dual lens setup.

Also on the back, the new Pixel phone will inherit the signature glass back found on the original, but it appears to be dramatically smaller and with a smaller portion dedicated to the glass, the fingerprint sensor is no longer on the glass, which IMHO, makes a lot more sense since the surface will be more flushed. Another rumored major change is the lack of headphone jack and that almost instantly make me scream out “noooo… not the headphone jack!” I don’t worship the headphone jack, btw, but not having it is like eliminating a convenience. It is akin to removing a public bus service just because you have a metro nearby. Seriously, as users, we could certainly use a little convenience. 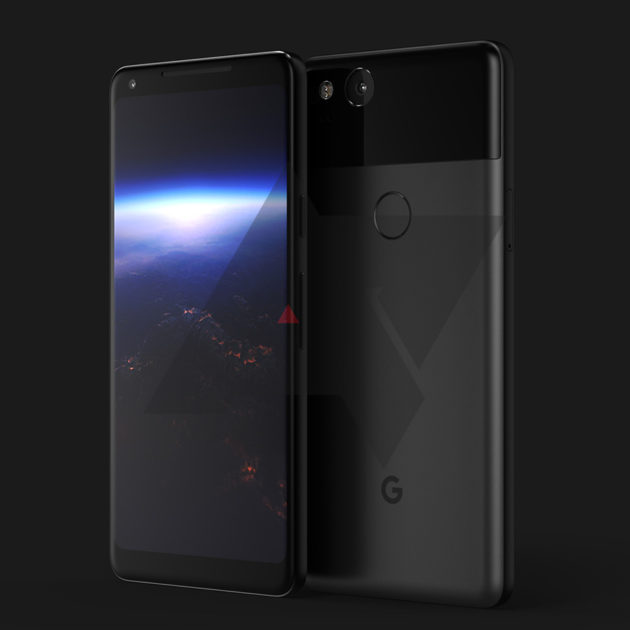 Anywho, in place of the traditional headphone jack will be a lone USB Type-C port which will be use for charging, data transfer and of course, audio output. Speaking of audio, another source said that it is possible that Google will be shipping a Bluetooth earbuds as standard, but we can’t confirm on this and tbh, we can’t recall where we pick up this little bit of info. Back to the display department, the AMOLED is reportedly an always on AMOLED item – a feature which has been with Samsung flagship for quite a while now. By the virtue of AMOLED display which does not lit up black pixels, thus allowing the screen to display, time, app notifications and whatnot, without sucking up battery life. With always on AMOLED display, users can quickly check time, notifications or anything that are configured to pop up on the lockscreen without having to wake up the display.

Wait. We are not done yet. There are more tidbits. Apparently, leaks also suggest Optical Image Stabilization will make way for Electronic Image Stabilization to “improve low-light photography and prevent shaky video footage,” which, if you ask me, kind of makes sense since with EIS, it will probably also save the hardware some much needed space to enable a thin form factor with an expansive, edge-to-edge display. In another report, the base storage for the second generation Pixel will be bump to 64 GB from the previous 32 GB while the top end storage option remains at 128 GB.

As for the processor, earlier rumors proposed that the new Pixel phones will be the first to be driven by the latest-generation Qualcomm chip, the SnapDragon 836, but there are contradicting reports that suggest otherwise because apparently, 836 will not be in time for the Pixel 2 launch, but more on that in a sec. Another improvement you can expect of the second Pixel smartphone is in the area of water and dust proofing which it will reportedly get an IP68 rating, the same as some of the flagships out there today. The current Pixel is only good at IP58 which is hardly water-friendly. So, this will come as a welcome news for people who love to brave the rain while using the device, or at least, have no fear when using it net to a pool.

Last but not least, is the leak that answers the important question of who makes the device. As it turns out, a FCC filing in the U.S. indicates that HTC will still make the Pixel phone, but only the smaller variety while LG will be responsible for the XL model. In the filing, it was also revealed that the smaller Pixel will be powered by 835 with the processor status of the larger Pixel still not established. Despite so, the first person who suggested the 836 SoC, prominent industry leaker, Evan Blass, is standing by his claims. Whatever it is, the air will be cleared come October 5 when Google is tipped to announced the Pixel 2 phones, along with a new tablet and wearable.