ASUS has done it. So did OnePlus, Vivo, LG, Huawei and a bunch of others. And now, it looks like search giant Google’s next flagship smartphone will have it too. Yes. We are referring to the disturbing trend of having a notch cut into the display – first started by Essential Phone, but later made popular by Apple when it introduced its ridiculously priced iPhone X, AKA the phone that make me go back to Android. So, anyways, what you are looking at is what could be the first photo leak of the next Google Pixel device, specifically the Google Pixel XL. 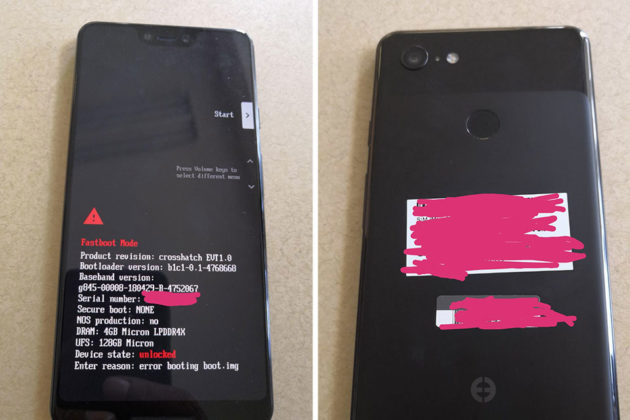 The leak images clearly show it will have the iPhone X notch design. Like, seriously? I mean, I am not a fan of the current Google Pixel XL. I thought the bezel is an eye-sore. OK. I am holding back. The truth is, I thought the design is downright ugly. There. I said it. On photos it look dope, but when I held it in my hand and took a closer look. It was hate that I feel. That’s how bad it is. Maybe Google’s design team/engineers have the same thought and they too, is trying ways and means to make the bezel disappear? I don’t know. I can only speculate.

Having said that, I’d be lying if I say that I am not devastated by this disturbing trend that has infected so many popular handsets, now purportedly Google’s next flagship smartphone. Rest in peace, smartphone design. The leaked photos also reveal something which I don’t like: it looks like the next Google Pixel XL won’t have dual camera as well. Bad news (at least for me). Sorry, Google, there is so much software can do to replicate the depth of field effect. It is not perfect and it will never will, so can you give us the real deal like, you know? Real, physical sensors already?

As much as I believe software can do wonders, there’s just so much it can do. Believing software can replicate everything hardware does is like believing Ultron is able to produce tens of thousands of Ultron minions out of thin air. However, I do not discount the fact that this maybe a Google Pixel 2 XL that was being used to prototype the third generation device. In any case, these supposed leaked images are said to be “prototype” of the device, so it is far from being the final product. Still, it is sad that the world of Android smartphone has bowed in submission to a design made popular by Apple. Seriously, this world is in dire need of an Android superhero!