Google Maps is as useful as it is and therefore, I see no real purpose in sprucing it up with Easter egg, but that does not stop Google from trying to make using Maps fun and the latest ‘thing’ that will make using the Maps fun (at least fans of Super Mario Bros. will be, I think) is the inclusion of the mustachioed plumber and his trusty Kart on the Maps. To mark Mario’s apparent special day, which happens to be on March 10 (that’s MAR10, btw), the team over at Google Maps collaborates with Nintendo to let the world famous plumber and his Kart lead you to your destination.

Dear Mario will be doing so for a whole week before Google Maps return to its usual navigation arrow. When initiated, the usual navigation arrow will be replaced by none other than the hero behind the wheel of the equally iconic go-kart. Unfortunately, this is as much as what the mustachioed hero will do – as an animated graphic, on Google Maps. Do NOT expect to be throwing virtual bananas or red shells at other drivers, though. Also, don’t expect to be bumping into Luigi, Toad, or Yoshi along to the Golden Gate Bridge, and no, saving Princess Peach from Bowser is NOT part of the deal either. It is just the usual thing that Google Maps does with the bonus of the company of Mario.

If you are up for it, then first, you have to ensure your Google Map is updated and if it is, you will find a question mark icon, in Super Mario Bros. fashion, obviously, next to the “START” button. Tap on the suspicious looking question mark block and agree to “Oh yeah! Mario time!” by hitting on “LET’S-A GO” and you are all set to be guided by the video game icon.

NOW READ  This Is Nest Audio Smart Speaker, The Successor To The Original Google Home 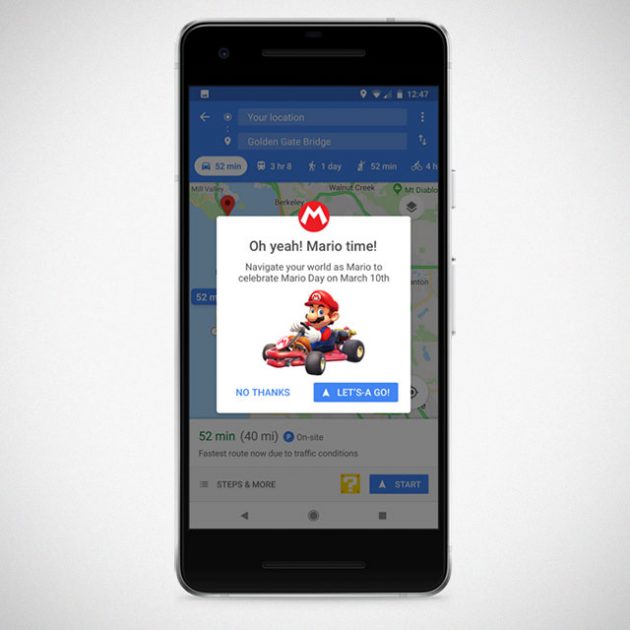