with the Griffin MOTO TC Rally, Griffin takes step up in blurring the line between reality and virtual reality. app-controlled remote control ain’t need, but the MOTO TC Rally not only stands out with its realistically-style vehicle (and size too), but also introduces impact sensors on the toy vehicle’s bumpers to detect damage caused by other drivers, which like in real life, changes the way the car handles. additionally, the free remote control app also allows you to customize your MOTO TC Rally with add ons like speed, damage repair, virtual armor (which will weigh the vehicle down like in real life) and more, and earn points to serve up attacks on your unsuspecting competitions. attacks include reducing your opponent’s speed, tamper their controls, or even flipping their steering wheel to cause havoc, so you can zip ahead of them.

it offers you two ways to play: a “Race the Clock” mode where you can play solo or with friends for the best timing using the included Lap Counter; and “Bump ‘n Run” where drivers deliberately try to dish out virtual damage each other’s vehicle while trying to get ahead of one another. the remote control rally car connects to your iOS devices via Bluetooth Low Energy and is equipped with proportional steering for super quick maneuvering. a few other goodies include extra large tires, raise ride height, fully independent shock-absorbing suspension setup, rear-wheel driven, and finally, a ground effect lighting package gives the ride some eye-candy. compatible with iPhone 4s and up, 5th generation iPod touch, as well as newer models of iPad. requires iOS 6.0 or later. the Griffin MOTO TC Rally is available now for $99.99. 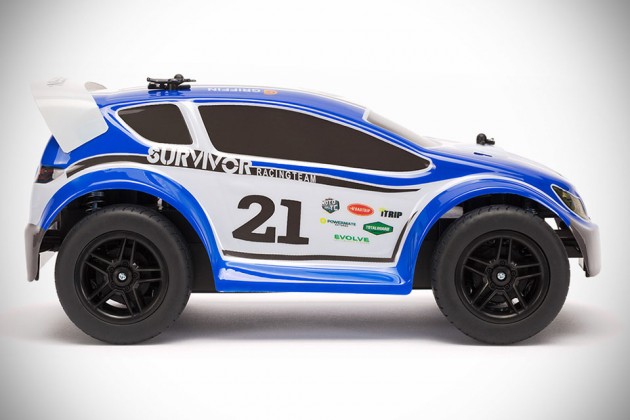