fancy a more ‘high tech’ way of creating movie and music on your Mac? no. not the magic trackpad, and its ‘magical’ counterpart, the magic mouse doesn’t quite count too, but there is an accessory that will let you do so and it is this sleek, aluminum-crafted job dial known as Griffin PowerMate Bluetooth. the PowerMate is not new, in fact it was first introduced way back in 2001 and have even seen ‘actions’ in blockbuster films like The Island and more recently, Pacific Rim. this updated version now goes without cable by going the Bluetooth 4.0 route, taking your movie and music making a notch up the futuristic chart.

out of the box, it works with iMovie and GarageBand, letting you scroll through files without using a mouse. it also works as a convenient volume knob and mute button for Bluetooth 4.0-equipped Mac computers and it is totally programmable for reining control over a wide variety of applications. the blue LED glowing base has been retained and like its wired counterpart, you can control the behavior of this pulsing LED to provide system status at a glance. the Griffin PowerMate Bluetooth will be on display at the 2014 CES this week at Las Vegas Convention Center, North Hall, Booth #5306. it will be available for sale in Summer 2014 for $59.99 a pop. 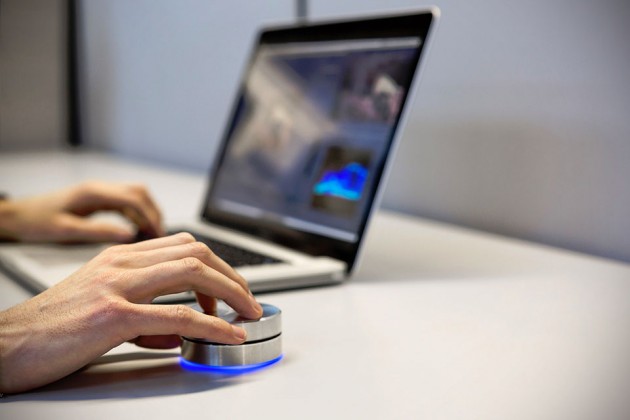