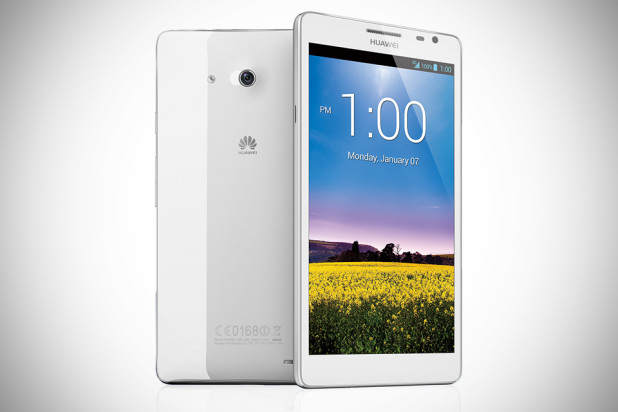 so you think 5.5-inch handset is BIG? wait till you hear about the Huawei Ascend Mate Smartphone. with its 6.1-inch HD display and a screen-to-body ratio of 73 percent, the Mate officially snags the title of the world’s largest screen smartphone, beating the Note II by a good 0.6″. powered by a 1.5GHz Hi-Silicon K3V2 quad-core processor with 2GB RAM, this new giant-on-the-block features a glorious 6.1-inch HD IPS+ touchscreen (1,280 x 720 pixels) with Corning Gorilla glass, a 8.0-megapixel rear-facing autofocus shooter with HDR, a surprisingly modest 1.0-megapixel HD front-facing camera, mic noise reduction technology, Dolby sound system, stereo recording, dual-antenna design and packs a whopping 4,050 mAh battery. the mega-size battery works in conjunction with Huawei’s QPC and ADRX smart power-saving technology, providing up to two days or regular usage in between charges. though not specifically detailed, the Chinese said that the Mate has the fastest charging among the smartphone of its class, which potentially saves you more than 30 percent of battery charging time. oh, today’s common connectivities such as WiFi, Bluetooth, DLNA, WiFi Direct, and WiFi Hotspot are included, of course. despite its size, Huawei’s custom UI (aptly called One-Hand UI) minimizes the virtual keyboard and dial pad to one side, thus making one-hand operation a possibility. though how well it will worked out depends largely on individual’s hand size. the Huawei Ascend Mate Smartphone is set to be released in China in February with an yet to be determined price (likely, Telco-binding contract) and comes in either crystal black or pure white. the handset was launched officially launched yesterday at the 2013 International CES. you can learn more about the Huawei Ascend Mate Smartphone HERE.