Until Wii came along, the idea of video gaming is akin to gluttony. Except in gaming, you don’t devour food, well, maybe not as much. Certainly, you won’t be jamming your guts with food beyond its capacity. In other words, you get no exercise, except for your fingers and that obviously, is very unhealthy and not desirable. But with the ICAROS, gaming becomes so much more. ICAROS is like a gaming simulator of sort, with virtual reality in the mix. Instead of letting your fingers do all the legwork, so to speak, ICAROS requires your entire body to work to play the game. 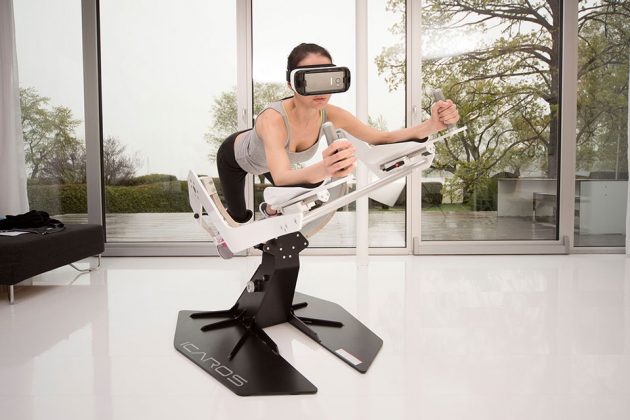 ICAROS combines fitness, through VR, with gaming, so not only will get the gratification of playing video games, but you will also be exercising your body too. Now, your mum can’t be screaming at you if you are on an ICAROS, can she? I mean, you are exercising too and exercising is a good thing, is it not? Germany-based ICAROS claims that its VR machine is not something pulled from thin air. It is, in fact, based on scientific research. The company said you could be burning 30 percent more calories and doubles the muscle stimulation when using ICAROS.

By now, you should be aware that ICAROS is a simulation machine that leverages on VR and hence, the games are entirely mobile-based. Until now, ICAROS is mainly marketed to fitness centers and other businesses, but today, the company is pushing the machine to everyday consumers too. For a starting price of 7.900 euros (about US$9,200), you will secure an ICAROS rig, controller, Gear VR headset, ICAROS Flight smartphone app, as well as a PC version of the app. A smartphone that works with the Samsung Gear VR is required to complete the setup, but it is not included.

NOW READ  As Much As We Love It To Be, The Pininfarina AutonoMIA Is Not A Driving Simulator

You can learn more about ICAROS on the company’s website, or the embedded video below, or if you are hitting up CES, you can find ICAROS on the Fitness and Technology floor in the Sands, booth #46050 from January 9-12, 2018.