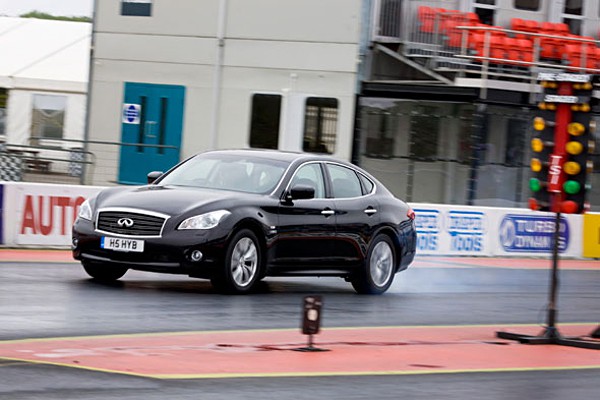 for those who are still skeptical about hybrids, the Infiniti M Hybrid latest feat should lay that skepticism to rest. the 360-horsepower (268-kW) petrol/electric luxury sedan sped into the Guinness World Records with a quarter mile sprint in 13.9031seconds which put it on par with the 1982 Lamborghini Countach S (13.9 seconds), and within a few tenths of 2007 Aston Martin V8 Vantage Volante and 2007 Porsche 911 Carrera (both 13.6 seconds). the vehicle, a standard production model, made history on the August 23, 2011 at the UK’s Santa Pod Raceway.
[ad#Google Adsense-text-468×60]

what’s more impressive was that it achieved this record with a CO2 emission of just 162 g/km and expense fuel at a rate of just 29 miles per gallon, that’s 12.33 kilometers per liter in metric units. the test car was driven by CAR magazine journalist Tim Pollard in the presence of an adjudicator from Guinness World Records, who crown the M35h as Guinness World Record for Fastest Full Hybrid Car (Gas/Electric). hit past the jump for a short clip of the Infiniti M35h in action at the Santa Pod Raceway.

Infiniti’s M Hybrid has sped into the record books as the world’s fastest accelerating full hybrid. Driven by journalist Tim Pollard and overseen by Guinness World Records®, the 360-horsepower gas/electric sedan covered the standing quarter mile in 13.9031 seconds (average of all runs).

The test car, a standard production model, set the record on August 23, 2011 at the UK’s Santa Pod Raceway, home of the FIA European Drag Racing Championships. From a standing start, the Infiniti M Hybrid harnessed its combination of electric motor torque from 0 rpm and V6 power at high revs to impressive effect, the car passing the computerised timing equipment at the end of each run at speeds in excess of 100 mph.

In the hierarchy of fast cars, the time puts it on a par with performance heroes like the 1982 Lamborghini Countach1 and within a few tenths of some Porsches, Ferraris and Aston Martins.

The result is all the more remarkable because the Infiniti M Hybrid emits just 162g/km of CO2 and, on the combined cycle, sips fuel at the rate of 29 miles per gallon.

“The Infiniti M35h proves that hybrids can be fast as well as frugal,” said Tim Pollard, associate editor of the UK’s CAR Magazine. “At Santa Pod you could feel the instant torque of the electric motor away from standstill – the car just leapt off the line. I did try changing gears manually, but it was fastest left in automatic. That was when we achieved the fastest single run of 13.8960 seconds.

“But what impressed most was the Infiniti M’s duality of purpose: it might be quick, but it’s also comfy and very easy to drive. It felt like it could do these runs all week long.”

The record run, in the presence of an adjudicator from Guinness World Records®, was the idea of Infiniti Europe’s Communications department to correspond with the start of sales of the innovative new hybrid. They had no trouble enticing Pollard into the driving seat. The point behind the exercise, which can be watched at www.carmagazine.co.uk, was to show that the Infiniti M Hybrid’s 62 mph time of 5.5 seconds – itself the fastest time listed for a full hybrid – was just one facet of the car’s overall Inspired Performance. The standing quarter mile, an iconic acceleration test the world over, is a more demanding challenge than 0-62 mph and offers a more complete picture of a car’s acceleration.

The Infiniti M Hybrid’s result in the 13-second area puts the latest Infiniti among the performance aristocracy – a fact which may surprise when it is considered that the car is a 16-foot-long four-door five-seater with as much of an emphasis on luxury, comfort and equipment as driving pleasure.

With its famous curves – themselves the focus of Infiniti’s new television campaign – providing the Infiniti M’s signature muscular stance, the M Hybrid is powered by a potent and high-revving gasoline V6 engine complemented by a 67-horsepower (50kW) electric motor, one of the most powerful in production. The first application of new-generation Infiniti Direct Response Hybrid technology, the total system power output of 360 net horsepower goes to the rear wheels in a two-clutch system that maximizes both performance and efficiency, while allowing the car to run in electric-only mode at speeds as high as 62 mph.

Guinness World Records® (GWR) was at Santa Pod to witness the record attempt and ensure Infiniti’s new benchmark for full hybrids takes its place among the record-breakers on the GWR website. The Infiniti M Hybrid’s Inspired Performance is also in line to feature in the 2013 edition of the famous Guinness Book of Records.

About Infiniti
Infiniti offers a full-line of luxury performance automobiles, including the G Coupe, Sedan and Convertible, Infiniti M sedan, EX and FX crossovers, and the QX full-size SUV. More information about Infiniti and its Total Ownership Experience® can be found at www.InfinitiUSA.com.[/toggle]