up till now, putting a computer together and the associated codings are only fun if you are a computer geek. however, the Kano DIY Computer Kit is set to change that perception and it wants putting together a computer and even coding to be as fun as playing with LEGO. being a person who have been through the aforementioned (and not being a true geek to start with), those processes prove to have a learning curve as steep as Lombard Street, which makes me think: is it even possible? well, i have to keep reminding myself that times have changed, a lot and this $120 DIY computer kit is here to prove the point. hailing from London, Kano is actually a Raspberry Pi-based computer and comes complete with a custom plastic enclosure (customizable with the included stickers and stencils), a wireless keyboard and multitouch trackpad combo, a SD card for the software, cabling, instruction booklet, and even a DIY speaker.

basically it has everything you need for a working computer running on Kano OS, a Linux-based programming interface, less the monitor, which you have provide yourself. once assembled, which should take about half an hour or so, you can start creating games like Pong and Snake, playback music and HD videos, use it as a wireless server and just about anything you can imagine because Kano, is after all, an open source endeavor. at the time of this writing, Kano has garnered over 530k in funding (that’s well over 530 percent funded, if anyone’s counting) on its Kickstarter campaign which still has 26 days to go. speaking of which, you can pre-order the Kano DIY Computer Kit now for just $119 a pop. hit the jump for another look, plus a couple of videos to learn more about this awesome educational tech product. 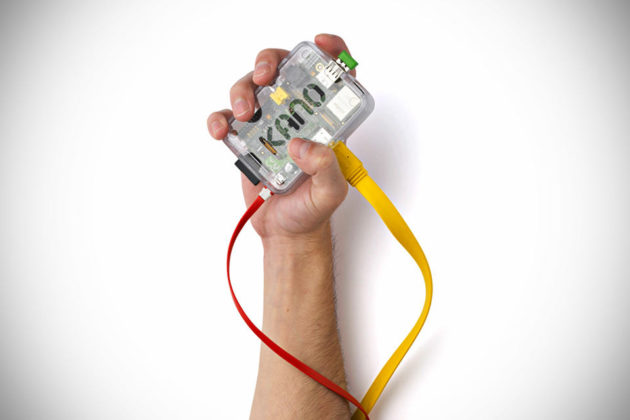