avid first person shooter fans will know that no matter how realistic game visuals are, there is no way to be really ‘into the gaming environment’. while it is true that the audio and visual lets you know when vehicles are approaching or which direction you are being sniped at, but more often than not, you will be too immerse in the actions to even realized that. this is where KOR-FX Gaming Vest comes in. this part tactical vest, part brassiere, this innovative gaming peripheral is set to take your gaming to the next level of immersion by giving ‘jolts’ of the tactile feedback such as feeling the shot on your chest or feel the rumble of the approaching vehicle. finally, your other useful senses can be put into action to aid you in your siege for the Red flags.

do not mistaken the KOR-FX for some cheap rumble pack which uses spinning motors to create the vibrations; at the heart of this vest is the pioneering 4DFX technology that uses acousto-optic technology to convert audio into precise, directed haptic output, providing pin-pointed high-definition haptic feedback that allows you to ‘feel’ the game as if you were right in the middle of the action. it is as close as you can get to the real deal without actually getting shot at and bleed to death, which is naturally a wonderful proposition. the vest also touts user customization, allowing parameters such as depth of field, intensity of feedback, level of differentiation between the right and left audio channels and more, to be fine-tuned to your preference. though it also have preprogrammed modes if you are not really into all the details. 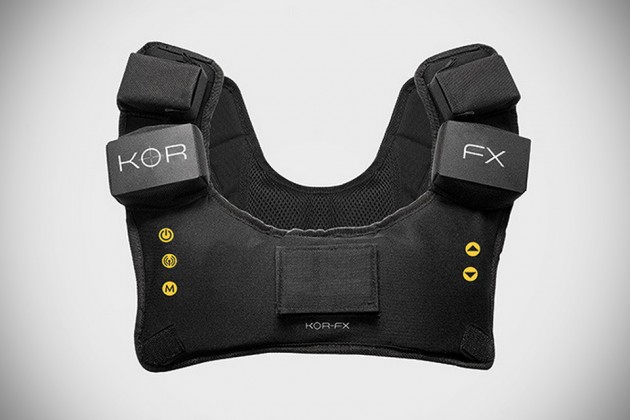 the vest is adjustable to suit most body types and is powered by four AA batteries to offer up to 40 hours of usage. finally, it is also a gaming peripheral that boast near-universal compatibility with popular and common platforms including PC, Mac, gaming consoles, and even smart devices like smartphone and tablets. basically, it will work with most sources as long as there is 3.5mm audio jack output. the development of the KOR-FX date back to as far as 2009 and have since seen several iterations before arriving to this attractive, tactical brassiere you see here.

however, it is still not quite there yet. Immerz Inc., the outfit behind KOR-FX, needs to secure some financial backing in order to take this from prototype to production. you can show your support by backing their endeavor over at Kickstarter. early backers will get to score one for $135 and if all goes well, you can expect delivery as soon as September this year. if you miss the special pricing, you will still able to get one for $150. keep going for a pitch video to learn more.