If you count skateboard as your choice of transportation for beating the traffic, then I suppose you won’t want to kick your way and also, discredit longboard as the way to go as it is way to cumbersome – especially when you need to hop onto a crowded train or tram. Well, fret not. Skateboard can still be your best travel buddy, if it is the Leafboard Super Lightweight Electric Skateboard. Leafboard claimed it is as the world’s lightest and most affordable freestyle electric skateboard, but that’s only half true cos’ at 9 lbs and mere 23 inches, Bolt remains as the world’s smallest electric skateboard, albeit only a tad lighter. However, at $329 Kickstarter price, Leafboard is no doubt the most affordable electric skateboard we have seen to date. 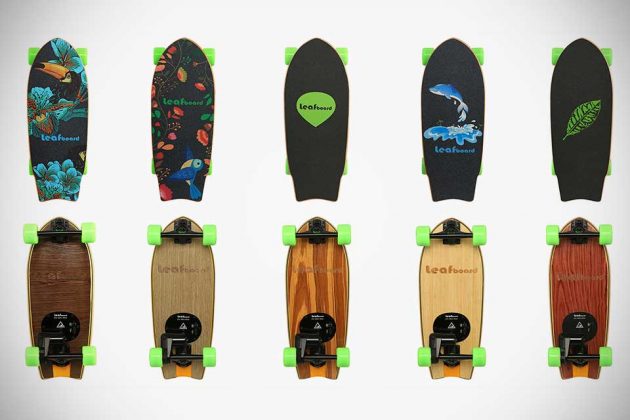 On top of that, you get to choose from a selection of backside veneer which, according to our knowledge, has yet to be offered by any makers. The slightly thicker-than-usual deck, composed of a glass fiber sandwiched between a maple deck surface and backside veneer, packs a 11-mile range (18 km) rechargeable 5,000 mAh that powers a motor to enable a top speed of over 18 mph (30 km/h) and capable of tackling up to 28 degrees gradient. The Leafboard, though may not as tiny as Bolt, is still super handy, measuring 25 inches long and 9.5 inches across, and tipping the scale at just 9.7 lbs. And if that’s still a handful for you, the included specially designed backpack should keep your hands free while you are on foot.

Other notables include regenerative braking with safety brake, full charges in 70 minutes, built USB port for sharing juice with your USB-powered devices, heavy duty integrated plate bearings, high rebound 72mm polyurethane wheels, rear light for night riding and intelligent OLED remote for control. I am not going to lie, the price of Leafboard is really enticing and it probably explains why it has garnered much support, enabling it to shoot past its set funding goal on Kickstarter early on its campaign. If you like to join the 200 people behind Leafboard, you are looking at dropping $329-359 for a unit and if everything goes as planned, you could be enjoying Leafboard as soon as December 2016. Keep going to catch the product pitch.