to use wood as the material to make a light bulb is nothing less than dreaming of the impossible, or so we thought. however, German light bulb specialist didn’t think so and neither did Japanese product designer Ryosuke Fukusada, and together they conceived a light bulb fashion out of 100-year-old Pine that actually let light passes – if ever so slightly. still, it is a feat beyond most people’s wildest imagination and one that calls for the use of an ancient and rarely practiced Japanese technique known as “Rokuro” which Fukusada sought out a master in this trade to create. the “Rokuro” technique involves turning a solid block of pine wood on a lathe, shaping the interior as the master craftsman hollows it out to an insane thickness of around 2-3mm. 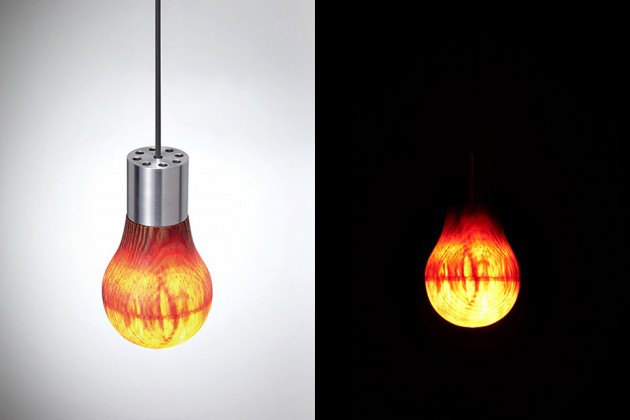 once the ‘bulb’ takes shape, a low-heat LED light bulb is carefully placed within, while a recyclable aluminum socket completes the package. the Wooden Light Bulb may be a bulb, perhaps even a novel one at that, but it is a culmination of modern design vision and traditional craftsmanship. the beauty of the bulb is, it is virtually indistinguishable to solid wood when not on, but when the switch is flipped, the super thin pine wood allows light to pass through, accentuating the natural wood’s markings. the resultant light is of orange and red hues that reminiscence of a glowing orb. naturally, this bulb is not meant to light up an area, but to serve as a decorative light art. however, at €2,000 a piece (about US$2,630), it is not a light art that most people can afford.