If you live and breathe LEGO, you will want this fabulous custom LEGO Breakfast Machine in your life. Now, we all know plastic and heat do not mix and clearly, LEGO MOC, however well conceived, can never whip up a proper breakfast without some form of intervention. Having said that, the creator of LEGO Breakfast Machine, The Brick Wall, did not say it, but it is safe to assume that this is not autonomous; the breakfast machine probably needs to be remotely controlled and therefore, it is kind of gilding the lily here, BUT the fact that it can make a breakfast of bacon and eggs is awesome enough for us to want to mention it here. 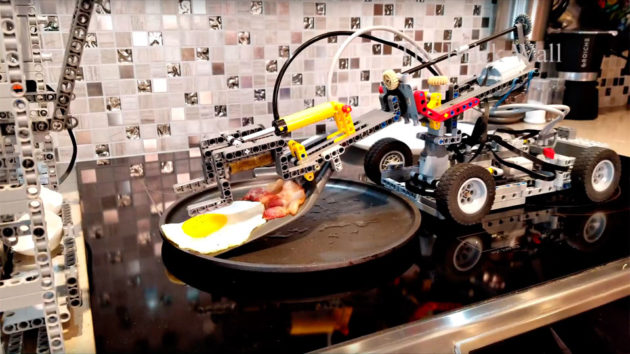 Disregarding the fact that one might be gilding the lily or whatever, this is an impressive creation because, it can crack an egg, drop a bacon to fried on a pan, and it has a separate, spatula-equipped mobile LEGO machine that can fry and move the eggs and bacon. It can even sprinkle condiments like salt and pepper, and oh, it does scramble egg too, albeit not the most presentable version. But hey, it works out rather perfectly, isn’t it? Apparently, The Brick Wall created this LEGO MOC for his dad who cooks breakfast every Saturday and Sunday.

The Brick Wall did not say how many pieces he have employed, but from what we can see, it is a complicated build that involved mainly LEGO Technic parts, including 10 LEGO PF motors and a LEGO IR receiver, plus a BuWizz brick and a pair of Sbrick Plus. Skip ahead for a video of the LEGO Breakfast Machine in action.