Most loyal Star Wars didn’t think Episode I, The Phantom Menace lived up to the franchise’s name, but if there was one thing good and memorable about the film, it would be the Pod racing scenes. It must be so, why else would there be a video game on it, right? I am not going to lie. I am a fan of the Pod racing scene and now even more so because of one dude: Alexis Dos Santos. You see, Alexis Dos Santos, AKA TKEL Creations, has recreated the iconic Pod racing scene with LEGO and mind you, he didn’t just cobble together a diorama of the scene; he recreated the scene as an interactive LEGO which he can play like a video game. Now, that’s super cool!

With the help of LEGO Mindstorms, four motors, a touch sensor and over 6,000 LEGO elements, Alexis created a series of conveyor belts that scroll past the player to simulate Anakin’s Podracer speeding forward. A mechanism is in place to allow the player to maneuver the Podracer left and right to avoid the various obstacles dotted across the conveyor belts. The concept is similar to those toy arcade that was once popular in the 90s. The ‘racer’ is usually stationary, but have the freedom of moving left and right as the ‘scenery’ is moving, giving the illusion of a speeding racer. 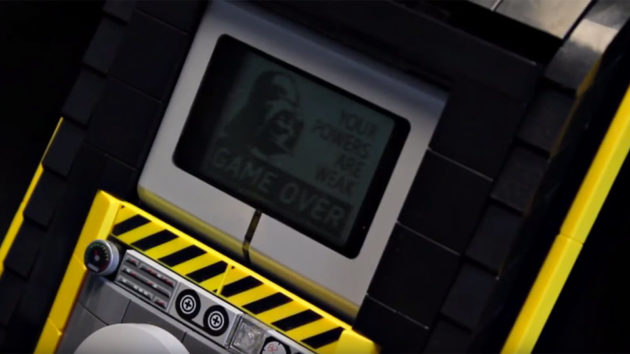 Completing the arcade setup is a Mindstorms computer with a little monochrome display that shows countdowns and other readouts. The result is an arcade that is absolutely convincing and the ‘realism’ is further enhanced by the included sound effects. Unfortunately, it is not something one could buy, but I am crossing my fingers that Alexis will put up the instructions on his blog so that I could build one and if I do, you can be sure I will be upsizing it to mini-fig sale for, you know, realism sake. Have a look at this awesome LEGO MOC in action in the video embedded below.