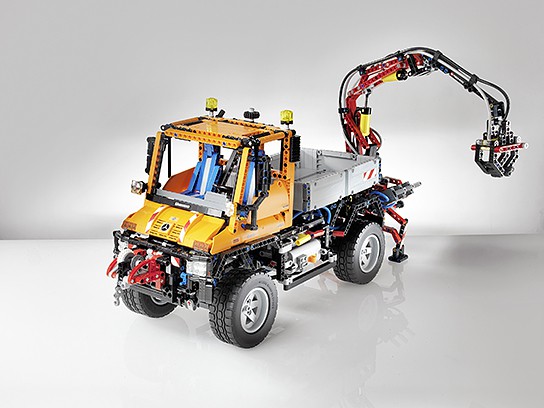 marking the 60th Jubilee of the Unimog, Mercedes-Benz has teamed up with the world’s biggest toy manufacturer LEGO to create the LEGO Technic Unimog U 400 model. the LEGO Technic Unimog U 400 is a 2048 elements kit that is targeted at adult LEGO fans (like yours truly here – trying to contain my excitement…) and it is designed true to the real Unimog with real functions, mimicking the real thing.
[ad#Google Adsense-text-468×60]

touted as the first do-it-yourself Unimog U 400, the model is actually 1:12.5 scale of the real thing but nevertheless it is the biggest Technic model every produced by LEGO. though no measurements where given but based on the scale given, we should be expecting a model length of slightly under 400mm. no doubt a huge model. the model vehicle has a combination of electric drive and pneumatics that are adaption of its full-size counterpart. the “Power Functions” run the pump of a pneumatically operated crane with a gripper arm that has almost 360 degrees of rotation. it even has a loading area which can be lowered. wow. i am totally sold.

other features include a serviceable control system and an engine that is accurate in every detail right down to the pistons. additionally, the crane and winch can be converted into a large snow plough, again, closely replicate what the original vehicle is capable of. the LEGO Technic Unimog U 400 will be available from toy retailers from August and costs about €190 (about US$275).