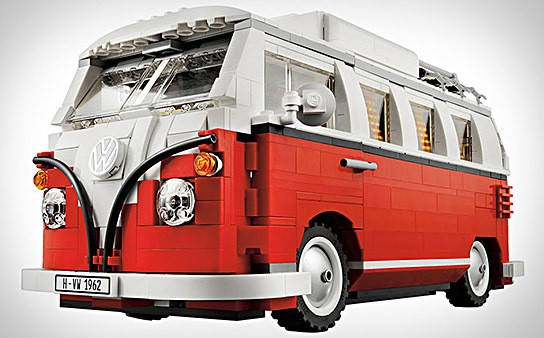 there is something for hippie wannabe to rejoice this Fall. LEGO has recreated the T1 Camper Van from the 1962 complete with iconic pop-top camper option. if you know LEGO bricks, you will appreciate the challenge LEGO designer has to face in creating the appearance of a much rounded vehicle using the predominantly squarish blocks. in anyway, they did it and the result is this 1,322 pieces set complete with the legendary flat-four (aka known as boxer) engine squeezed in between the rear axle. well, that’s just half of the story.
[ad#Google Adsense-text-468×60]

popping up the removable roof unveils an authentically detailed interior featuring a sink unit, dinette with bench seats (one of them even converts to a bed!), checkered flooring and among other things. there is even a tee-shirt handing on the window that says “Make LEGO models, not war”. you can’t get any hip-pier than that, can you? other features such as opening doors, front safari windows, and the tricolor ‘V’ paint scheme completes the classic look. check out the a video interview with the designer of this beautiful bricked van after the break.

LEGO via Autoblog via Uncrate