Portable keyboards and in this case, Bluetooth-enable ones, are not new and up till now, it is either super compact, but not actually a full size keyboard, or it is almost full-size, but lacks of the portability. Yes. They are still portable, possibly by the way of folding, which is not exactly the compact, compact, if you know what I mean. Then in comes the LG Rolly Keyboard that truly blew our mind in terms of size: both in its stowaway and deployed form. Instead of the usual foldable design, Rolly rolls up into an easy-to-carry “stick” that could be easily slip into any purse or briefcase. Well, technically, it doesn’t really roll in or out; it actually folds up along the four rows of keys, much like a sushi bamboo scroll, but only larger in scale. 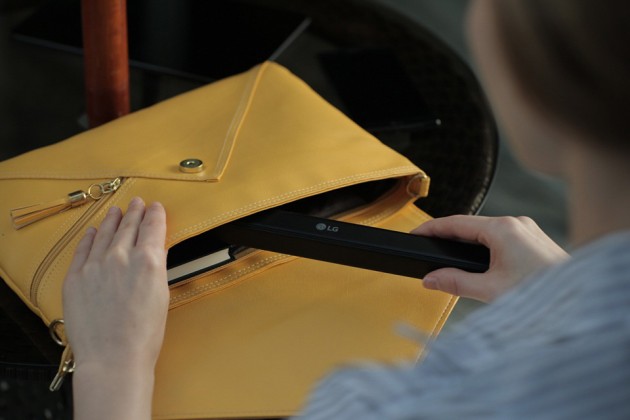 With a key pitch of 17mm, it is as close as you can get to a full-size keyboard and it is made of impact-resistant and durable polycarbonate and ABS plastic to withstand the rigors of on-the-road usage. Another major boon is, it offers tactile feedback, as opposed to “spongy” feel offered by many of today’s silicone-based keyboards. Furthermore, it is one of those rare keyboards with such compact, stowaway size, that has a built-in smartphone and tablet stand. Last but not least, it boasts an auto pairing function that is as simple as it is high-tech, which is activated upon unfolding the keyboard. It can pair to two different devices at the same time, via Bluetooth, naturally, and has the ability to toggle between the two paired devices with a touch of a key. LG Rolly Keyboard runs off a lone AAA battery, which provides it with up to three months of average use.

Want one? Well, the good news is, this ain’t no concept product. LG will be rolling the Rolly Keyboard in the U.S. this September, followed by Europe, Latin America and Asia in Q4. However, pricing is yet to be detailed, but we suspect it won’t cheap, as LG’s Seo Young-jae kind of described the keyboard as “one of the many premium input devices” the company will be unveiling in coming months. And premium usually means not-so-cheap. Anyways, the mystery will be reveal soon enough. In the mean time, LG Rolly Keyboard will be making its debut at this year IFA in Berlin, Germany, happening between September 4 and 9. You can check it out in person at Hall 18 of Messe Berlin during the said dates. Scroll down for a product promo video, as well as a few more look.