First, it was the AT-AT from Rogue One: A Star Wars Story and now, a Kylo Ren’s TIE Fighter – life-size, no less. Yes. We are talking about our favorite garage inventor, madcap Colin Furze and yes, he built a crazy awesome full-size TIE Fighter which a person (or a few kids) can enter. It doesn’t fly though, obviously, but still cool, nonetheless. Like last year, Furze has teamed up with eBay for this project. However, there’s something special this year. James Burton of XRobots was also involved and for his part, the go-to guy for all-thing robotics have built incredible, remote control evil droid BB-9E to go with Colin’s Kylo Ren TIE Fighter. 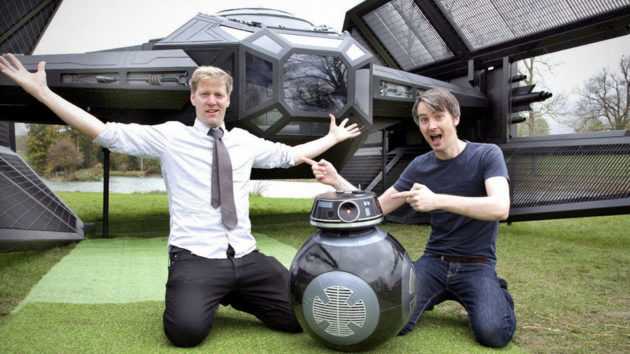 As with last year build, everything required to build the two were source directly from eBay website. Not a surprise. It is, after all, a sponsored project. It took Furze six weeks to complete before the parts were transported to Burghley Park to be assembled. Measuring a monster 46 feet long, 23 feet across and 14 feet tall, this TIE Fighter on Earth features a full steel construction, suitable amount of LED light elements and a non-functioning (obviously) cockpit you can visit. Completing this Star Wars Project is, of course, Burton’s impressive BB-9E which was James very own designed inspired by the Droid star of the upcoming Star Wars flick, The Last Jedi. Enough said, now we invite you to have a look at the two awesome builds in the videos below.

NOW READ  Grenade Keyboard Because, In This Day And Age, Words Could Be Weapons Too