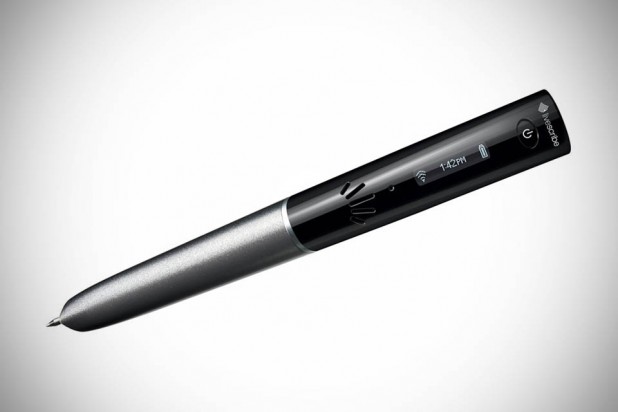 despite the technological advancements, some of us still can’t let go of the good’ol pens. the end result is, we have to scan whatever we have written on paper to turn them into digital copy for sharing and archiving. however, there’s a much smarter way to do it and that’s with the Livescribe Sky WiFi Smartpen. the concept is simple. just start writing with the Sky WiFi Smartpen like you normally would and this smartpen will take it from there. it will automatically sends your notes wirelessly via WiFi to your personal Evernote account, after which you can access to them anytime, anywhere via a variety of platforms including PC, Mac, Android and Apple devices.

additionally, the pen features a built-in microphone for recording lectures or seminars in clear, crisp sound while the built-in speaker allows you to playback your recorded audio. other features include a bright, high-contrast OLED display that shows the connectivity and battery status, time et cetera, a standard 3.5mm audio jack allows for the use with headphones or the Livescribe 3-D Recording Headset, a soft touch grip design for comfortable holding, a replaceable ink tip, and up to 8GB of onboard storage for up to 800 hours of audio recordings. available now with a price tag of $169.95 for the 2GB model, $199.95 for the 4GB model and $249.95 for the 8GB model. more images and a product video follows after the break.

Livescribe via Bless This Stuff

NOW READ  3 Technologies That Can Transform Your Business